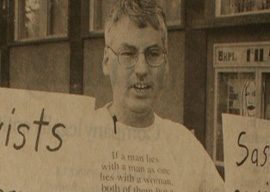 I’m a free-speech absolutist in principle, but I still steeled myself to spend an hour or so with Whatcott, even if only on film. What struck me immediately was how quintessentially Canadian Whatcott looks; he’d be perfect for a Tim Hortons commercial, the dorky dad huddled over a steaming double-double at his son’s 5 AM hockey practice.

Less reassuringly, he also looks and sounds like notorious New York subway shooter Bernhard Goetz, with the latter’s guileless Aspergian candor and placid affect. As far as Whatcott’s concerned, when he hands out flyers stating that gay men are more likely to die of AIDS than straights, or when he’s quoting Bible verses, he’s just stating scientific facts and repeating 2,000-year-old scripture. He even includes his real name and phone number! Why is he in so much trouble?

Whatcott admits without rancor that not even other pro-lifers and evangelical Christians like him much, and it’s easy to see why. Unlike his stiff-necked comrades, Whatcott is (consciously or not) working out of the Merry Pranksters tradition of zany Groucho Marxism. With a gap-toothed smile, he recalls insinuating himself into a Gay Pride march and maneuvering to the front of the line. That’s when bystanders realized the man leading the parade was carrying a sign condemning “sodomites” to hell. Whatcott says they “threw gumballs” and other projectiles at him. He was eventually bum-rushed by “a big gay on roller skates.”

(Whatcott actually managed to hold a Straight Pride Day in Regina back in 2001. His permit wasn’t renewed in subsequent years.)

When he learned that abortion doctor Henry Morgentaler was to receive the nation’s highest civilian honor, Whatcott claims he “got an image of the Order of Canada, crapped on it, wrapped it up, and mailed it to the Governor General.”

Whatcott’s youth was a modern-day Dickensian saga of foster homes and abuse that left him a glue-sniffing street kid. On camera, he admits to sexually servicing a man for drugs so matter-of-factly he could be talking about what color he’s decided to paint the kitchen.

Whatcott found God in jail, of course. He got a practical nursing diploma (with honors) and worked in a Salvation Army senior’s home, then at AIDS hospices. His supporters in the film explain that Whatcott was the last face many gay men saw before they died. As Whatcott explains, “Their boyfriends and friends were long gone.”

As for his own friends, many express reluctant support and tempered admiration for Whatcott’s “stunting.” One gay activist who loathes the man appears on camera supporting Whatcott’s Supreme Court fight, the infamous “Little Sisters” case having become a major chapter in his community’s modern mythology. But not major enough: At least in this film, his fellow homosexual activists are far less generous toward their opponent—and less coherent.

Whatcott’s is the latest case comprising what looks suspiciously like a Gay/State guerrilla war against Christianity, a battle about which I cowrote a book and so tire of rehashing: the printer fined for refusing to print pro-gay materials and court-ordered to do so anyway; the preacher banned for life from quoting certain Bible verses, even in private correspondence; another for taking out a newspaper ad citing those scriptures (the chapter and verse references, mind you—not the actual words).

His case’s outcome will help determine whether or not the chilling of free speech in Canada drops yet another degree. Those of us who’ll be watching most intently—we who intentionally violate Canada’s poorly drafted and arbitrarily enforced “hate speech” laws pretty much every day, just because we feel like it—will carry on doing exactly what we are doing regardless of the court’s decision. Whatcott himself answers to a higher authority. I’m pretty sure his biggest concern the morning of October 12 will be choosing the most annoying T-shirt to wear.