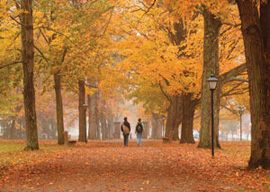 The Tenured Holocaust Nut
This professorial type suffers from the noisily announced effects of a disaster that he/she never personally experienced but which scarred them forever. When asked about where this type “went through the Holocaust,” the answer may be on a visit to a nearby Holocaust museum or on the way out of a shopping mall. It matters not whether the Nazis ever harmed a hair on this person’s body. Grace accrues to this professional sufferer by being ethnically related to Nazi victims—or by getting other people to believe, even counterfactually, that he/she is. Thought to bear the holy stigmata, the Holocaust surrogate-victim is allowed to rave with the best of them, including GLBT, black nationalists, neo-Aztec irredentists, and the presumed descendants of slaves who peddle their shtick with special enthusiasm during Black History Month.

Being seen as a Holocaust victim-by-proxy allows the cardholder to engage in free association. Insisting that the Nazi Holocaust against the Jews was uniquely evil, for example, does not prevent the grumbler from claiming that other preferred groups suffered genocide as well. These other groups most definitely do not include those murdered by Soviet or Chinese communists nor, according to Harvard law professor Alan Dershowitz, such unfashionable Nazi victims as the Poles, who were only selectively killed. But Holocaust language can and has been extended by academic experts to Bosnian Muslims, Somalian animists, blacks under slavery, and even Native Americans, who lose funding for their landmarks. A law of PC usage: Holocaust clout reaches its natural limits when it clashes with the desire for recognition among other approved victims, especially the ones that scream loudest.

The Academic Parenters
They raise their offspring according to the latest feminist and possibly GLBT guidelines. This practice is common to what are called (for absence of a less flattering description) academic couples, who commit the mistake of producing kiddies they then presume to raise. Having seen the results of such couplings, I am firmly convinced that the state should pay academic mates to remain childless. It may even be necessary to have the state, as a public service, adopt their progeny and enforce a no-children policy for these usually dysfunctional couples.

The offspring are almost always messed-up real bad. If only they had been blessed with the opportunity to grow up in relatively sane family units—perhaps among hard-shell Baptists in Arkansas or in a polygamous Mormon compound in the Utah desert! Then these victims of academic madness would have been given a relatively level playing field. Like other youngsters they would have acquired honest-to-goodness “gender roles” and perhaps even been taught such useful vocations as embalming bodies or fixing mopeds.

The worst of these sickies are the progeny of college administrators, whose parents are too busy making careers to notice youthful disasters waiting to happen. I know of cases where academic moms and pops are doing the administration thing thousands of miles apart while junior gets flung back and forth between them like a ping-pong ball. One of the more successful efforts at rehab in such a situation is the case of the son of academic administrators whom I learned about from a former colleague. Still in less-than-stable condition, this fellow nonetheless managed to become gainfully employed after a twenty-year emotional derailment. His job, which consists of drying soapy cars at an auto rinse, pays minimum wage, yet it allows him to do what is really important in his life—namely, attending drug-rehab classes at night. This guy once had dealings with a woman but wasn’t quite sure of his sexual identity, even after procreating. When he’s not wiping down cars and gulping down methadone, he experiments with other sexual-orientation choices. Perhaps his child will be lucky enough to break out of this cycle of lunacy, but not if academic administrators such as his grandparents get to socialize him.

A former colleague of mine who is a gifted poet, bon vivant, gun nut, and self-declared man of the right once noticed a swarm of the aforementioned types sitting at a table in the college cafeteria. As he surveyed their smarmy faces, he thought of the Jean-Paul Sartre play Huis Clos—translated as No Exit—and which deals with the futility of human existence as hell on Earth. My colleague pointed to where the nags were sitting and uttered the unforgettable phrase “table without exit.” At last I have exited.