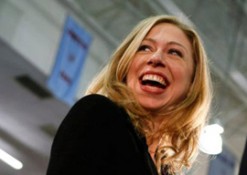 Chelsea Clinton has made it pretty clear that she has no intention of running for public office. It’s a choice most likely informed by what must have been a childhood scarred by Washington insanity. But perhaps that decision is for the best, anyway, as it appears Chelsea has a bit of a tin ear when it comes to the national mood. This is supposed to be the era of a chastened America, embarrassed by her enormous debt, humbled by having to lean on a communist government to finance two wars. As the long-term unemployed nervously watched to see if Congress would pass a few more weeks of jobless benefits, Chelsea was in the final stages of planning her wedding, estimated to have cost between $2 million and $5 million. To hell with the Great Recession.

(Granted, these estimates were provided by professional wedding planners who have an incentive to fudge their numbers”an extra $100K might convince customers that spending just a couple hundred bucks more on romantic napkin rings is not insane, it’s what people do.)

Chelsea’s new husband, Marc Mezvinsky, works at Goldman Sachs. His parents were both members of Congress, his mom also a TV news reporter. His father, Edward Mezvinsky, went to prison for a couple dozen counts of fraud. Chelsea, a famously stellar student, gets an F in Optics.

But maybe that’s the point. Maybe Chelsea’s Wedding of the Century is a rebellion against the showy, and totally fake, Average Joe antics of her parents mandated by their political careers.

Compare the language of mother and daughter in this exchange on a campaign bus during the 2008 primaries. A young voter mentioned that she was vegan. Chelsea replied that she”d been vegetarian since she was 11, “At the time I liked to think that it was purely motivated by reactions to two articles I read in my life science class, one about the detrimental qualities of excessive amounts of red meat on your body and two, about the living conditions of cattle in slaughter houses… However, I think there was also some emergent rebelliousness.”

“Throwing a multi-million dollar party for yourself amidst the worst economic down turn since the Great Depression is honest in a way that Chelsea’s parents, with their desperate seeking of blue-collar approval, will never understand.”

Marc and Chelsea have known each other for many years, and it’s impossible to imagine they didn”t bond at least a teeny bit over having embarrassing parents”and not the kind of embarrassing parents who post cheesy things on their kids” Facebook wall.

to explain””must have been unbearable for their daughter. As for Marc, before his dad earned the nickname Crazy Eddie for claiming bipolar disorder caused him to defraud friends and strangers out of millions of dollars, he was known as Fast Talking Eddie, and before that, Rat Claw Mezvinsky, for brandishing a rodent-tainted sausage on the floor of the Iowa Legislature.

Unlike nearly every action of their media-seeking-missile parents, the couple shrouded their event in secrecy. Sort of. Chelsea wore an enormous hat to hide her face while walking in the front door of wedding gown guru Vera Wang. (She still showed much more modesty than her dad, who publicly discussed losing 20 pounds for the event.) Speculation on the invite list lasted weeks. There was a press holding pen on the estate grounds. Official statements on the vows, then photos of the dress, were released to the media. The New York Times live-blogged the event, eliciting my favorite endearingly syntactically weird comment on the whole event: “…it is a royal mob wedding. We are living in a Caligula time decadence.” It captures the nuptial mania, even if it slightly overstates the depravity of the actors.

So maybe there’s a refreshing honesty in the Clinton-Mezvinsky don”t-look-at-me-please-God-look-at-me matrimonial spectacular.

Throwing a multi-million dollar party for yourself amidst the worst economic down turn since the Great Depression is honest in a way that Chelsea’s parents, with their desperate seeking of blue-collar approval, will never understand. The standard stunts of the campaign trail”Hillary Clinton pretending to like doing whiskey shots, John Kerry pretending to like cheesesteak, George W. Bush pretending to love clearing brush during the hottest time of the day in the hottest time of the year in Texas“have no appeal to Chelsea. Her wedding was a sincere celebration of love”and status. And despite all the secrecy surrounding it, nothing was hidden. Chelsea Clinton elects to not feel your pain.