Children and Guns: The Hidden Dads 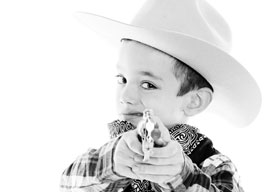 Yes, accidental gun deaths are “wildly” underreported but in Georgia’s case, we”re still talking about 67 accidents over the course of 13 years. That’s five children a year in a state of about ten million. This is not a cover story. There are around 75 million children in America. A child is much more likely to be killed by a car or a bike or even a doctor. Should we outlaw doctors, too?

The cover story also neglected to mention the children’s lives that are saved by guns. Texas has some of the laxest gun laws in the country. They”ve also got the 15-year-old son of a Sheriff’s Deputy who used his dad’s gun to stop home invaders, the 11-year-old who did the same, and the little boy who grabbed a gun and saved his family after he was tied up. We know how many mass shootings happen in gun-free zones like the Navy Yard or the school or the movie theater, but how many shootings don”t happen in gun-friendly zones? I can think of at least nine.

When I joined the NRA and got myself a .30-06, my New York City friends were appalled. One said I was endangering my children and when I told him it’s locked away he said, “My dad’s gun was locked and I got to it.” My friend’s argument wasn”t helped by the fact that he’s still alive. One woman scoffed at my “paranoia,” rolling her eyes at the nonexistent home-invasion threat and my delusions about defending my family. Gun-control advocates are notoriously bad at math and they think home invasions never happen, but somehow kids are constantly shooting themselves. I had to break it to her that my buddy down the road had just been shot at. He was teaching his wife to drive and angrily told some redneck (the guy has a tattoo across his back that says exactly that) to go around him. The guy didn”t appreciate being told what to do, jumped out of his truck, and shot at my friend’s family as they sped off in horror. The redneck spent a year in prison and is out now. He lives less than a mile from my house. He could tell my friend was an unarmed “cidiot,” as the locals call us.

When I put the NRA sticker on my bumper it was to show support for the organization but also to make it clear that my car is not a gun-free zone. The NRA sticker on our window says the same about my house. I have a gun for self-defense, but I also use it to hunt. Sometimes I just shoot shit like a big jug of cola or an old TV. It’s fun. They should try it. Seeing a liberal shoot a gun is like watching a vegetarian try bacon. You can feel them coming over to the dark side.

Using dead children to further your political agenda is sick and wrong. But if you want to get to the bottom of gun deaths in America, check in with black families and stop glorifying single moms. There is an epidemic of dying children, but they don”t look like the child on the front page of The New York Times. They look like Trayvon. The guy who shoots him will likely look like Trayvon, too. And in both cases, like Trayvon, they probably weren”t living with their dads.