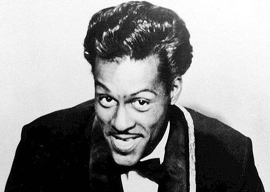 Berry got his start playing with pianist Johnnie Johnson, who “sued him in 2000 over songwriting credits and royalties to a number of hit songs.” Hilariously:

[Keith] Richards had also been Johnson’s most vocal and ardent supporter and argued for Johnson’s deserving credit, telling “Rolling Stone” magazine, “In a way, I”m a bit responsible. I said to Johnnie, “These songs should really say Berry/Johnson.” It was obvious after talking to him and watching him play. But Chuck being Chuck, you”d be lucky to get a quarter. Or you”d end up paying him.”

Little Richard borrowed heavily from Esquerita, right down (or, more accurately, up) to the hairdo; his “open letter to the music industry” to the contrary, Chubby Checker flat-out ripped off Hank Ballard; and after Fats Domino came to town, pianist and singer “Smiley“ Lewis earned another nickname: “the unluckiest man in New Orleans.”

But the myth persists, hence the surfeit of (I still say justifiable) “Back to the Future is racist!” essays easily found online. And anyone who thinks white liberal virtue-signaling is a 21st-century cyberphenomenon should dust off their copy of Slouching Towards Bethlehem. In Joan Didion’s “New Journalism” traipse through 1967 San Francisco, we meet a gaggle of white hippie “street theater” performers, in blackface, wearing signs on their backs reading, among other things, “WHO STOLE CHUCK BERRY’s MUSIC?”

Incredibly, they begin jabbing a “Negro” passerby with nightsticks:

By now there are several Negroes around, reading the signs and watching.

“What”d America ever do for you?” the girl in blackface jeers. “White kids here, they can sit in the Park all summer long, listen to the music they stole, because their bigshot parents keep sending them money. Who ever sends you money?”

Like anyone who writes from the right, I get called a “white supremacist” a lot. Which is a scream, because half the time, I think we”re just goddamn embarrassing.