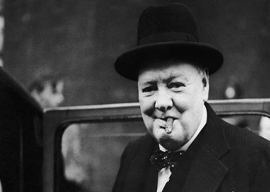 Churchill had some surprisingly positive things to say about Hitler prior to the invasion of Poland. In Francis Neilson’s The Churchill Legend Neilson quotes what Churchill wrote about the German leader in a letter to himself dated September 17th, 1937 and included in Step by Step, published in 1939:

“One may dislike Hitler’s system and yet admire his patriotic achievement. If our country were defeated, I hope we would find a champion as indomitable to restore our courage and lead us back to our place among the nations.”

Along the same lines, Neilson cites the 1937 book Great Contemporaries, in which Churchill states that Hitler’s life’s story “cannot be read without admiration for the courage, the perseverance, and the vital force which enabled him to challenge, defy, conciliate, or overcome, all the authorities or resistances which barred his path.”

I’m now wondering about pre-1931. If the twentieth century could have been “irrevocably altered” by Churchill’s brush with death in a traffic accident between the World Wars, what if Churchill had never been engaged in politics in the first place? For the answer, one has only to get a copy of The Churchill Legend and read it. Francis Neilson, who was a member of Parliament at the outbreak of the Great War, claimed to have known Churchill longer than anyone alive.

The list of disasters Churchill presided over prior to the Second World War includes the fiasco at Gallipoli, the Lusitania’s sinking (when Churchill was First Lord of the Admiralty), and the issuance of the Balfour Declaration in 1917 by the British War Cabinet, which opened a Pandora’s box from which has sprung endless injustice and bloodshed in the Middle East. Not that Churchill deserves the sole credit for these disasters, but his fingerprints are there. He was certainly involved at the highest level. Both the sinking of the Lusitania and the Balfour Declaration were the byproducts of a desperate strategy to drag America into the Great War.

One gets the impression from reading Neilson that Churchill’s entire public career”grounded in both World Wars”shows indisputable evidence of incompetence, opportunism, ruthlessness, mendacity, and bad judgment. Yes, history is repeating itself.