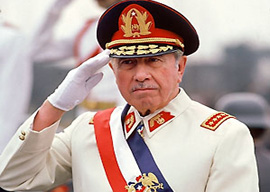 Under prevailing Western standards, these leaders were and are all thugs. Mubarak held the reins of a police state which was restrictive in every sense of the word. Pinochet was the kind of villain one reads about in books. Gaddafi keeps the peace through tribal hostilities.

Yet this is the very crux of the matter. Despotic and cruel rulers ought to be encouraged to leave, not threatened when they consider doing so. By actions and statements which indicate that “the global community” will “hold them accountable,” their reigns are needlessly prolonged.

It was more than twenty years between when Pinochet and Mubarak each ceded control of their own accord. Is that a coincidence, or did it take that long for the fear of popular reprisals to fade? Was it worth imprisoning a single man for a few years, however deserving, if the result was to make positive that millions of others in dozens of countries should live indefinitely under similar tyrants who refused to leave for fear of facing Augusto’s fate?

Even now, every two-bit US official takes each opportunity to state that Gaddafi “must be punished.” This is a perfect strategy to ensure he will fight to the finish, if not use his vast stockpile of chemical weapons in the process. What possible incentive does he have to leave his people in peace if there is to be none for himself?

In the modern West it often seems every action taken is in diametric opposition to its stated goals. If it wants despots to depart, then immunity is the answer. This is the only way. High politics is seldom clean, but it must always endeavor to be farsighted. While it may be distasteful and lacking in a greater justice, we must sacrifice our petty vengefulness to rid ourselves of such vermin.

Every hour we delay merely increases the torment and suffering of those we purportedly seek to aid. Every wasted opportunity to demonstrate a begrudging mercy is another dictatorship we have enabled to fight unto the last man.

As in Libya, whose rebels are now in a stalemate on the verge of defeat, the West never seems to realize that the last man down may very well be our own.