Clooney’s Girlfriend’s Scandal, More on Mel, and an “Idol” Shakeup 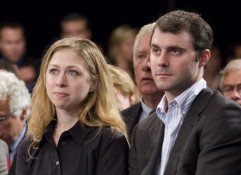 This week is all about hiring, firing, a wedding—oh, and stripping. The most overblown Wedding of the Year/Century is finally upon us, and Chelsea Clinton is going to say “I do” to longtime boyfriend Marc Mezvinsky this weekend in the formerly sleepy hamlet of Rhinebeck, New York. In a very calculated, Clinton-esque way, details are shrouded in secrecy. One of Oprah’s favorite chefs is catering the meal for the 500 guests, but lookie-loos may not get a peek of the bride—the state has issued a no-fly zone over the area and police will be checking out the Hudson River to ensure all the shutterbugs have stayed away. We’re exhausted just reading about this—it’s impossible to imagine how Chelsea feels. Or maybe she loves it.

Zac Efron: Disney heartthrob no more. The former High School Musical b-ball player was caught hanging out at a strip club with former costar Corbin Bleu, but instead of shying away from the press, he did what every self-respecting boy with a film to promote would do—turn it into a hilarious story for Jimmy Kimmel. The 22-year-old confessed to Kimmel: “I had an image of what this would be like…stunna shades, with like T-Pain and Usher, making it rain money. And it just wasn’t like that.” He did, however, get permission from girlfriend Vanessa Hudgens before his trip.

Late Thursday night brought a host of changes to the judging table of American Idol. Ellen DeGeneres is bowing out gracefully, admitting what fans knew from her first day—she’s just too nice to critique the fragile talents of the young ‘uns. On the other end of the table, Kara DioGuardi’s contract was not picked up for another season. She’s remained quiet about her firing. And now speculation is ramping up that Jennifer Lopez and Aerosmith’s Steven Tyler will take over the empty seats. Actual musicians as judges? What a concept—so novel, in fact, it might even work!

Oh look, more insane drama concerning Mel Gibson and former girlfriend Oksana. Oksana  sent an email to her lawyer hours after the alleged attack by Mel, writing “He hit me in the face with a fist and broke two of my front teeth” and he was “choking me with his elbow.” The morning after the brawl, Mel allegedly sent an email to Oksana, asking her to call him and saying he was “unspeakably sorry.” Could there please be a moratorium on Mel news until, say, after the court hearings? Or just forever?

George Clooney’s picture-perfect romance with Italian girlfriend Elisabetta Canalis is getting a little shaken up. A club in Milan was busted for prostitution and drugs, and one of the high-end models hired to “entertain” clients at VIP tables said she did cocaine with Canalis in 2007 and 2008. Whether true or not, all it does is mar her reputation a little bit—it’s unlikely George will be dropping her from his arm at future red carpet events.

After months of build-up, France’s First Lady Carla Bruni is finally filming her scenes for Woody Allen’s upcoming movie Midnight in Paris, costarring Marion Cotillard, Adrien Brody, Rachel McAdams, and Kathy Bates. But it appeared all wasn’t well on the set. Husband Nicolas Sarkozy showed up and the lovey-dovey couple had what one paper called an “intense, heart-to-heart chat.” Either she was calming him down about his plunging approval ratings or assuring that she wouldn’t fall for her neurotic director. Sometimes it’s hard to tell.

Everyone’s favorite Mad Man Jon Hamm says he’s “quite dissimilar” from his character Don Draper, and that losing his parents when he was young made him “stop believing in a storybook existence.” Hamm also said he doesn’t have the “marriage chip,” which is a good thing. It’d be illegal for Hamm to marry all the women lining up for him.

Designer Marc Jacobs and his partner Lorenzo Martone broke off their engagement two months ago, and Martone is not wasting any time getting back on the market. Martone has been seen out in New York and Miami with former boy band member Lance Bass. Although the two seemed “very flirty” and “obviously dating” while making the rounds in the city, a friend of Lance says Lorenzo is “trying to make it more than it is” and that Lance prefers boyfriends “younger and prettier” than the 31-year-old Brazilian guy.

The Swedish royal family is getting their own taste of drama this summer, this after the gorgeous wedding last month of Crown Princess Victoria and Daniel Westling. Prince Carl Philip is definitely dating model Sofia Hellqvist—the relationship was confirmed because the palace stopped the publication of nude photos of the model. A slightly tarnished past isn’t enough to ruin the romance, apparently, as the prince introduced her to his parents, King Carl XVI Gustaf and Queen Silvia last week.