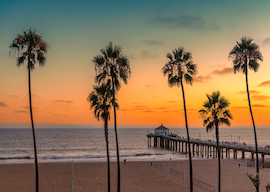 Last month, a prominent figure on the right asked me point-blank, “Why don’t you move?” He was referring to California, and my stubborn refusal to leave this high-tax, low-IQ, far-left, illegal-alien-riddled state.

But I ain’t moving. I was born here. I love this state. I’ve traveled all over the world, and I’ve never found a place as geographically and climatically perfect as Cali (sorry, Texans, you may have low taxes and such, but I’ve driven the length of your state twice, and it’s suicide-inducingly dull).

But the No. 1 reason I refuse to leave California is that I’d rather die here than give leftists the satisfaction of driving me out.

In the course of my Holocaust research, I spent a good deal of my youth in Germany. I got to know many Germans, usually in the context of “Hi, I’m a Holocaust Jew from America! Let’s be pals.” And in 1995 I toured Japan as part of an extended lecture gig sponsored by a professor at Tokyo’s Waseda University.

I was always curious what it’s like to grow up in a “loser” country, one that surrendered unconditionally only to be occupied and remade by its victorious foes. Because what did I know of defeat and humiliation? My house sits on land formerly occupied by wigwams and pueblos, the occupants of which got their butts royally kicked ages ago, and now the soil is mine. From the Civil War to the two World Wars, my family has always been on the winning side of everything. So I was keen to understand how the Germans and Japanese handled growing up knowing how badly they were pantsed and castrated after WWII.

The overwhelming majority of Germans I met dealt with the humiliation by apologizing, bowing, and prostrating themselves. It got to the point where I stopped mentioning revisionism to them, not because they’d chew me out (they couldn’t…I’m Jewish), but because they’d literally start crying like children. “We’re a bad people! We did bad things! We deserve the scorn, we deserve the punishment. We owe the world an eternity of apologies.”

Christ, I was embarrassed for them.

The Japs, on the other hand, handled their lot with greater dignity (no surprise there, due to the Japanese fetish for honor and the fact that postwar Japan was not subjected to the grotesque mindfuck the U.S. and Soviets inflicted on postwar Germany). The most common attitude I found among my Japanese friends was “We took one for the team.” That “team” being humanity. “We were manipulated into a war with the U.S., and, as the only people to endure the horrors of large-scale nuclear bombing, through our misery, the world saw firsthand the terrors of such things, and that’s why it never happened again. Our dead did not die in vain.”

Fair enough. At least none of the little yella bastards ever wept in front of me.

The bottom line of my fascination was, what are the psychological effects of living in a nation where a foreign force came in and told you “everything you were was bad. Everything you stood for was bad. And now we’re going to remake you into a good people and a good country, whether you like it or not. You were foul, you were vile, you were monsters. But now, we’ll try to make you into decent humans…not that you have any say in the matter.”

“Thirty years ago, I looked at defeated peoples as curiosities to be studied. I never thought one day I’d join their ranks.”

That was the question on my mind during every one of my extended stays in the former Axis nations. And if I’ve come off as a little callous toward the citizens of those countries, you can take some comfort in knowing that the joke is now firmly on me.

Because all of a sudden I’m in their place.

Governor Gavin Newsom’s June 22 Facebook and Twitter address to the people of California should have been a big story in the conservative media-sphere. It wasn’t, because the right dismisses California as too far gone. And yes, we are, but that doesn’t mean what’s happening here isn’t instructive, not with fleeing Californians resettling in red states and swing states, making them bluer. Not with anti-American immigrants settling in the heartland and taking over entire congressional districts. So, sure, mock us in Cali. But don’t ignore what’s happening here, because there are plenty of people who want the same thing to happen to you.

Pay attention to California as a cautionary tale.

“Stalin” Newsom’s social media address was the speech of an occupier to a conquered people. The gist of his lecture was essentially, “Everything this state was was bad. You Californians who were here in the 1990s were monsters. But we’ve vanquished you; you’re desolated, done. Your opinions no longer matter, your accomplishments are being dismantled, and better people are replacing you.”

The speech is only a minute twenty-five. Amazingly, not a single site on the ’net has bothered to transcribe it, so I’ll do it myself (Newsom’s words are in italics), with heckling where appropriate.

In California, I want folks to know you have rights. Know your rights, learn more about your rights, your legal protection.

Uh, who’s he talking to here?

Ah, he’s talking to illegals. Even though in this speech he uses the words “us,” “we,” and “Californians,” it’s clear that he’s speaking to only one type of Californian—illegal immigrants.

According to the governor of California, what the people of California voted for in overwhelming numbers in the 1990s was merely “political theater.”

Nineteen ninety-four’s Proposition 187, also known as the Save Our State (SOS) initiative, was a ballot measure that established “a state-run citizenship screening system and prohibited illegal immigrants from using non-emergency health care, public education, and other services in the State of California.” Prop. 187 passed in a landslide: 59 percent to 41 percent. Sixty-five percent of white voters supported it. A majority of black and Asian voters supported it. Sixty-two percent of independents supported it. But apparently it was only “political theater.”

…three strikes you’re out, the fear of the other…

Cali voters passed the “three strikes” law in 1994 by a whopping 72 percent to 28 percent margin. All we were asking of our criminals was that they not commit three felonies, yet Newsom thinks we were being very unreasonable indeed. To him, three strikes represents “fear of the other”…the “other” being murderers, thieves, and rapists. And who could possibly fear them? And by the way, it’s a well-known fact that in ’94, policies like three strikes had the widespread support of black leaders looking to reduce crime in their communities. So who exactly were the “others” they feared?

…we had people talking down to people, talking past people…

Is he saying we were “talking down” to three-time felons by telling them, “You should have stopped after your second one”?

And now, back to Newsom “talking down” to us:

We’re better than that. We’re resilient. We came out stronger than ever on the other side. That’s the spirit of our state, and spirit defines this moment.

Who’s we? We passed Prop. 187. We passed three strikes. We voted to end affirmative action in universities. We voted to end bilingual education. We voted to ban gay marriage (2008!). Not all Californians who were here in the ’90s have fled. Many of us remain. But we’ve been neutered by demographic change and partisan redistricting, to the extent that “we” no longer matter…to the extent that Newsom spends the rest of his speech addressing those who are not “we”:

…unless those differences include being right-of-center…

…uniting, as we like to say, around our common humanity. We’re better than this moment in the United States of America, and know we’re gonna get through it stronger than ever.

This isn’t a governor addressing his constituents; it’s Henry Morgenthau ostensibly addressing the conquered Germans, but in fact only speaking to the Jews and communists. “Hitler’s dead. His day is over. His supporters will be hunted to extinction and beaten down by denazification laws. You are Germany now. No one else’s voice matters. In fact, no German has the right to even knock on your door.”

To Newsom, the commonsense reforms of the ’90s were Hitlerian, and people like me are vanquished Nazis.

There’s something unique about Newsom’s speech. He’s not only badmouthing the people of his own state, he’s celebrating population replacement. “The Californians who used to live here were evil. Thankfully, we’ve silenced them or driven them out.” Maybe I’m wrong, but I can’t recall a previous example of a U.S. governor saying, “This state used to suck because bad people lived here. Now it’s finally getting to be an okay place!”

Thirty years ago, I looked at defeated peoples as curiosities to be studied. I never thought one day I’d join their ranks.

Reflect for a moment on how healthy Cali was in the ’90s. Now look at your own state. Are you confident it can never go ass-up like mine? Don’t be. It can happen to you. Because Newsom is hardly an anomaly among today’s Democrats. He just happens to be in a position where he can “let loose” a bit more than other Dem governors. He no longer has to pay lip service to that segment of the population that disgusts him.

So, yes, it’s too late to fight for Cali. But if you live in an unconquered state, fight for it. Fight against demographic change from outside the U.S. and from within.

And if there’s a home for sale on your block, and you see a car with Cali plates drive up to the open house, don’t immediately get hostile; it might be one of our “good” expats. Just calmly approach the new arrivals and ask them how many genders there are.

Based on the response, invite them in for pie…

…or get a rope and find a tree.