Conservatism in Russia and America 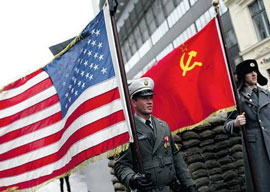 Puerto Rico remains an expensive and not terribly useful luxury, and if it goes broke, we’ll pay even more. Similarly, Cuba helped bankrupt the Soviet Union in the 1980s. Recently, Putin offered to bail out Ukraine, but that honor now seems to be incumbent upon the West.

In 1904, Sir Halford Mackinder’s article “The Geographic Pivot of History” reversed Mahan’s emphasis on sea power by designating Afro-Eurasia the “World-Island,” with the Russian Empire more or less as “the Heartland.” Mackinder summed up his credo:

On March 3, 1918, the new Bolshevik government signed the Treaty of Brest-Litovsk, in effect ceding Ukraine to Imperial Germany. This enormous triumph allowed the Germans to concentrate their forces in the West to try and seize Paris before the American army arrived en masse. This high point of German might, followed by its sudden collapse that same year, convinced Corporal Adolf Hitler that Germany had been “stabbed in the back” and needed to reconquer Ukraine and additional lebensraum.

From 1945-1989, the Cold War played out in large part as a struggle between the realms of sea and land, or as they were called in Orwell’s 1984, Oceania and Eurasia.

Born in 1962 to a colonel-general in the GRU (the Soviet equivalent of the NSA), Dugin has worked tirelessly since his dissident days in the 1980s to elaborate new ideologies for ex-Soviets to replace internationalist Marxism-Leninism.

In the 1990s, when official Moscow turned to American advisors such as Larry Summers and Stanley Fischer, Dugin was a fringe figure. But privatization turned into piratization, validating Dugin’s fundamental anti-Americanism, which opened doors for him among the political elite.

Dugin’s multiple attempts at entering electoral politics under the banners of various parties he has joined or invented have repeatedly foundered, which is hardly surprising given his love of complex intellectualizing. In the continental manner, Dugin would be superb at the Parisian cafÃ© pastime of extemporaneous philosophizing.

Still, Dugin now enjoys a professorship at the top Russian university and is a frequent television commentator. Dugin sees himself as a Neo-Eurasian, the heir to an intellectual tradition of exiled Russian whites who saw communism as only a temporary phenomenon. To Dugin, the Eurasian empire will be built upon “on the fundamental principle of the common enemy: the rejection of Atlanticism, strategic control of the USA, and the refusal to allow liberal values to dominate us.”

His 1997 book Foundations of Geopolitics advocates a new Moscow-ruled Eurasian sphere of influence that would, among much else, re-absorb Ukraine. (His Ukrainian ambitions seem more territorially limited today.)

In compensation, Germany would get back Eastern Prussia, and China would be given the green light to take Australia.

Still, it would be useful for Americans to try to grasp why we increasingly irritate the rest of the world.

By geography, history, and culture, America is a more privileged place than Russia, and thus American conservatives have more and better privileges to conserve than the poor Russians do. But American governments have been aggressively pushing their luck overseas, with inevitably diminishing returns.

But sea power has never led to despotism. The nations that have enjoyed sea power even for a brief period”Athens, Scandinavia, the Netherlands, England, the United States”are those that have preserved freedom for themselves and have given it to others. Of the despotism to which unrestrained military power leads we have plenty of examples from Alexander to Mao.

In this line of thinking, a sea power needs money and technology but seldom needs to conscript all that many sailors. In contrast, a land power such as Prussia or Czarist Russia needed to impose army discipline upon much of the male population.

Of course, most of the continental powers haven’t had much choice about being a land power. Without an English Channel, much less an Atlantic Ocean, to protect them, they’ve felt the need to build highly centralized states to avoid the fate of Ukraine.

And as Mahan predicted, the Atlanticist sea powers have had both more success and more fun in recent centuries, as shown by English increasingly becoming the world’s dominant second language.

It’s worth keeping in mind, though, that being protected by a sea that you control can be used not just for defense. Consider the career of the English national hero Sir Francis Drake, whose victory over the invading Spanish Armada in 1588 set off a spectacular late Elizabethan outpouring of national self-confidence, epitomized by Shakespeare.

But why did Drake have to play Defender of the Realm in 1588? In sizable part, it’s because he”d previously been playing Pirate Captain, plundering Spanish treasure ships in the Atlantic and Pacific.

Thus, while Anglo-American history looks like a triumph of liberty and democracy to Anglo-Americans, to much of the rest of the world it often resembles impudent piracy.