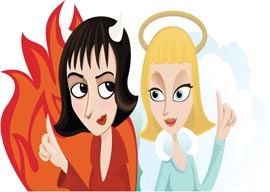 That the bad is naturally attractive to man and child is a precondition of the possibility of goodness; for it requires no self-control to refrain from eating the inedible, a pile of concrete for instance. Only when confronted by something that one should like to eat, but knows that one shouldn”t, is there a question of self-control.

However, people vary naturally in their powers of self-control. Does this mean that there is more virtue in people who are naturally impulsive but do manage to control themselves than in those who are more phlegmatic and behave similarly? The most tempted are the most virtuous, if and when they actually do overcome the temptation. I know an eminent man, by nature of bad character, arrogant, intolerant, and full of hatred, who nevertheless makes intermittent efforts to be good, and sometimes even succeeds for a few moments in being affable and kindly. One knows that it won”t last, that he”ll soon turn nasty again; but his struggle against his own God-given temperament has something of the heroic about it.

By comparison with him, I have it easy; by no means saintly, I have much less of a struggle than he to be amiable. Is my general amiability (which, I confess, sometimes partakes of a good dose of pusillanimity) less meritorious than his occasional flashes of the same quality?

These are the kind of insoluble conundrums that intellectuals delight in for fear of becoming like everyone else. For most, however, it doesn”t matter much in human dealings where virtue and vice come from; they are like the policeman who lamented the passing of the good old days of British policing, when, he said, “we was nice to the nice people and we was nasty to the nasty people.” Nowadays, however, they have to be nice to everyone, which means that in practice that they are nice to no one.

On my way back from London to Paris, I discovered that I had made a mistake in reserving my ticket and had booked it for January 30 instead of December 30. My lunch, already expensive, promptly doubled in price with the new ticket that I was obliged to buy. I thought of my cousin, and laughed. She would like the story next time I met her.