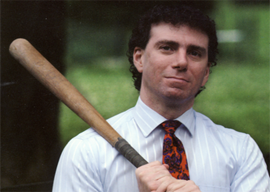 The similarities thus stated, there are important differences to be noted. My own defenestration was all too foreseeable; in fact I foresaw it. Jason Richwine was a casualty in one skirmish of the Cold Civil War: the Cultural Marxist effort to Brazilify the USA via mass immigration.

Frank Borzellieri’s case stands out in a number of interesting ways. He had spoken and written frankly, though temperately, on race and immigration during his pre-teaching career from 1993-2005. He had last spoken at an American Renaissance conference in 2002 and last written for the magazine in 2006. The quotes that sent Ms. Lestch reaching for her smelling salts”“diversity’s a weakness,” etc.”were from a 2004 book.

The main reason Frank gave up writing was that from 2006 on he was, at his own expense, and while working full-time in school administration, pursuing first one then two (simultaneous) master’s degrees in his new career field. He was awarded both degrees with high distinction. This guy does nothing by halves.

Thus Frank embarked on his serious career as a Catholic educator with a long paper trail behind him. A colleague brought that paper trail to the attention of Frank’s superiors at the school where he was teaching in 2007. Those superiors”the school’s principal and pastor”asked the Censor Librorum of the Archdiocese (this guy) to review Frank’s writings for doctrinal error. None was found, so Frank’s contract was renewed.

At this point you might be thinking that it would be a good idea if Conservatism, Inc. were to appoint a Censor Librorum of their own to certify contributors’ freelance writings or Ph.D. dissertations as doctrinally pure. They’d save themselves a lot of trouble, right?

Not necessarily. In Frank Borzellieri’s case the nihil obstat was transubstantiated into Scotch mist as soon as Ms. Lestch at the Daily News murmured the holy incantation “white supremacist.”

Frank Borzellieri is now unemployable in the field he studied for years to enter, and his student-loan debt is mounting. Sympathetic lawyers are helping him sue the Daily News for defamation. Frank remains a devout Catholic, which, given the cowering pusillanimity of his superiors in the New York Archdiocese, is a remarkable testimony to faith in the song, not the singer.

Watch that video and help Frank Borzellieri if you can.