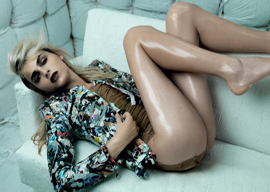 Considering a sex change? Succumbing to Celebrity Apprentice? Boldfaced names will pull all sorts of scandalous stunts for a little attention. This week, a gender-bending male model says he’d pull a switcheroo for real if Victoria’s Secret came a-calling, Star Jones and Meat Loaf are testing the waters against The Donald and his hair, and a moronic Ke$ha fan probably regrets letting the singer give him a fresh tattoo. Welcome to another round of thrill-seekers who laugh in the face of danger”even if they should be crying.

Andrej Pejic is more committed to being a star than nearly anyone we came across this week. So what do boobs have to do with it? Lauded in fashion circles for his runway struts in women’s clothes, the very pretty Serbian-Australian model said if he was offered a Victoria’s Secret contract, he’d consider breast implants. “You’d have to, wouldn’t you? I couldn’t imagine doing it any other way,” he said. He’s already doing campaigns for Marc Jacobs and Jean Paul Gaultier, and he has another big deal in the works. You know ears are perking up at the lingerie line. Imagine those billboards!

And how’s this for gutsy? Despite its head designer awaiting trial for public slurs”John Galliano was recorded hurling anti-Jewish taunts at a couple in a Parisian bar”the house of Dior is pressing on with the brand that sprung from his mind and bears his name. (Yes, Dior did fire him last week, but did you expect them to ditch a label completely?) The latest iteration of the John Galliano label, the fall 2011 collection, wasn’t the subject of an overblown presentation and was instead shown to a small group of fashion insiders. Natalie Portman has already publicly denounced the eccentric fashion star; what will it take for the storied design house to make a clean break?

Hard to say who’s more terrifying in this situation: Star Jones, Survivor villain Richard Hatch, or the washed-up stars desperate enough to challenge them at Celebrity Apprentice. Donald Trump assembled a C-lister’s paradise for his latest season, which premiered Sunday and pitted former juicehead Jose Canseco against David Cassidy (who had the honor of being the first one booted). Their first task: running a pizza parlor in New York. Star Jones has gone from The View to handling loads of pepperoni and cheese. It looks like her own, well, star may be on the rise. And never underestimate Trump’s intelligence. He said he hasn’t seen fighting like this (apparently between Star and NeNe Leakes) since the days of Omarosa. Hope he shields the hair helmet before the swinging starts.

“It’s the first time the beverage has been made at 1600 Pennsylvania Ave.”

Mitt Romney amped up his prospective 2012 presidential bid this weekend with a fiery (for him) speech in New Hampshire. The former Massachusetts governor ripped the “Obama Misery Index,” a trifecta of unemployment, foreclosures, and bankruptcies. Pretty (vicious) words, yes, but it’s going to be a steep climb for Romney, who’s still seen as somewhat of a GOP defector for his “Romneycare” program in Massachusetts”a precursor to the much-maligned “Obamacare” that is still circling around in courts. Romney’s already failed at being all things to all people, which is why his latest speech”and some focus”should do him some good.

In the knock-down drag-out run-up to the 2012 campaign, no one will blame Barack Obama for cracking open a few beers. But the president is taking it one step further by brewing his own beer at the White House. The White House Honey Ale was dreamed up by his personal chefs with home-brewing equipment the Obamas paid for themselves. (Apparently Michelle is also a fan.) It’s the first time the beverage has been made at 1600 Pennsylvania Ave.

Tick-tock…Ke$ha might be trying to extend her 15 minutes of fame with her outrageous antics. Who needs another hit single when everyone’s talking about your condom line? She’s created a “collector’s edition” latex”complete with her tortured face on the front”to pass out at concerts. And it seems her fans are equally as daring: One bared his ankle and allowed Ke$ha to pierce it with a safety pin for a tiny tattoo. That’s definitely not sanitary.

And finally, he may not be a singer, actor, reality dimwit, or sidestepping politician, but we have found a flight attendant more annoying than tantrum-prone Steven Slater. Recently, an unnamed Virgin Blue flight attendant thought it’d be hilarious to put a flying couple’s baby in an overhead bin. Mommy wasn’t too happy about that”nor about the reaction of her fellow fliers, who laughed at her expense. “I was devastated, absolutely devastated,” said Natalie Williamson, who was flying from Fiji to Sydney when the flight attendant put her son in the bin for about 10 seconds. The company says the family was already playing peek-a-boo, but the game went too far and the employee was fired. Thank God it happened now”carry-on fees double when kids turn two.