Dave of the Locust 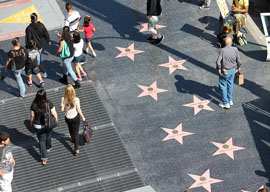 These lunatics scare the hell out of their children by telling them that Trump is going to murder them and their parents, and then they use their kids” nightmares as “proof” that Trump is dangerous. No, cretins, your kids aren”t scared because Trump is Hitler. Your kids are scared because you keep telling them they”re going to be killed. Your little ones aren”t responding to Trump; they”re responding to you. It’s amazing that these dumbasses can remain oblivious to their role in this farce.

My childhood best friend is now a prominent Hollywood executive. I”ll leave out any specific details for reasons that will become apparent shortly. Now, this friend of mine, this big-time exec behind some of your favorite TV shows, is, of course, a leftist. We grew up together, practically next door, two Jewish kids with permissive parents, but we ended up going to different high schools, and we lost touch during our senior year, for reasons that will become apparent shortly. With the advent of Myspace in 2006, we reconnected. We”ve remained friends since, always avoiding any major political arguments.

But these are new days, new times.

About ten years ago, this fellow, who I had always taken for being gay (for reasons that will etc., etc.), adopted a child from South America. Following Trump’s victory, my old friend went batshit crazy, with posts day after day after day about how Trump and his supporters were Nazi rapists. He couldn”t seem to make up his mind whether Trump was going to rape his adopted daughter or deport her. One day in December, he posted a self-pitying rant about how Trump’s victory had hopelessly damaged his life because he’s the “parent of a brown child.” I”d finally had enough. It was beyond me how any parent could reduce their child to nothing more than a color. “This isn”t my child; it’s my brown child!” I flashed back to the flak Bush Sr. took in 1988 when he referred to his Mexican-American grandchildren as “little brown ones.” How times have changed. Now calling your kids “brownies” is the progressive thing to do, as long as it allows you to claim victim status following an election that didn”t go your way.

I messaged my old buddy, and I decided to make a point. A point that he, and the Cathy Ladmans of the world, and all the other leftists who find their identity in real or perceived victimhood, fail to get: that we have a choice”we always have a choice”regarding what we decide to dwell on or let go of. We can decide that we”ve become permanently damaged by something, be it a mother’s offhanded comment or a presidential election, or we can rise above whatever troubles us. Plus, as he was essentially calling all Trump voters rape fans, I thought it might be instructive to drag my ol” pal down memory lane so that he might gain a bit of perspective.

I reminded my friend why I stopped speaking to him back in summer 1985: He had attempted to sexually assault me. He”d lured me to the back room of a store, and, well, all that matters is that I got away, despite the fact that he had a good eight-inch height advantage (something about not wanting to get raped can make even the wee-est of men hulk out). Bottom line: No (lituh-rull) butthurt occurred. I fought him off, and that was that. It was a completely insignificant moment in my life, and one that has had zero impact since then. My good friend got horny, he tried to force himself on me, I fought him off, and said good-day. End of story.

When we reconnected via Myspace, we had lunch together. I decided that if he wasn”t going to bring it up, I wouldn”t. Because why would I? To play the victim card? To glean material for a self-pitying one-man show? That would be terribly”what’s the word?”leftist of me. But here was my old friend now, ripping Trump supporters for being pro-rape, claiming he”d been traumatized by Trump’s victory, so I just had to say, “You know, you did try to sexually assault me, and not only did I let it go, but I let you let it go.” In light of his anti-Trump righteousness, I asked him if he”d care to address what happened that summer day back in “85.

Guess who immediately got defriended!

All leftists are hypocrites; Hollywood leftists merely have a larger megaphone. And make no mistake, as awards season marches on, they”ll be screaming into it like a sonofabitch. It doesn”t bother me one bit, and you shouldn”t let it bother you, either. Because, as election “16 so wonderfully demonstrated, ain”t nobody listening anymore.