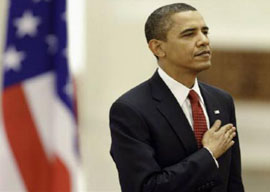 David Broder’s recent observations about our Peace Prize President have created a stir. In his controversial October 31 Washington Post op-ed “How Obama might recover”, Broder postulates that Obama could choose the Iran war option. Actually, Obama has been doing a variation of this all along, ever since he found himself inside the Oval Office surrounded by the bipartisan Washington establishment. At this juncture”with the Tea Party sans-culottes ascendant and the Republicans soon to control Congress”Mr. Broder, the Washington press corps” dean, is suggesting that Obama could confront Iran more aggressively, up to and including a full-scale war, to regain his mojo and stimulate a near-prostrate U.S. economy.

Here’s how Broder reasons it:

With strong Republican support in Congress for challenging Iran’s ambitions to become a nuclear power, he [Obama] can spend much of 2011 and 2012 orchestrating a showdown with the mullahs. This will help him politically because the opposition party will be urging him on. And as tensions rise and we accelerate preparations for war, the economy will improve.

As goofy as it sounds at first blush, this tactic has a solidly successful Democratic track record if you consider the FDR model in 1939-41 and, to a lesser extent, LBJ’s mid-1960s decision to plunge headfirst into Vietnam. Broder’s thinking is based upon domestic politics, not upon foreign policy considerations”and certainly not upon morality, America, or humanity. In terms of foreign policy, the suggestion is wild and crazy. Morally, it’s ignominious.

But in domestic politics, ramping up the fake Iran crisis could be a winner. It has worked before”most outstandingly for the Democrats” godfather, Franklin Roosevelt. Based on circumstantial evidence and formerly classified documents, FDR railroaded the United States into the Second World War to save his failed presidency and to vanquish the dogged Great Depression. America was in no real danger from Japan or Germany. The authentic danger to America was from within, from Roosevelt and his extended entourage. The only thing not clear is whether or not FDR personally knew that the Imperial Japanese Navy was steaming toward Pearl Harbor with the intent of bombing the U.S. Pacific Fleet, and yet the executive branch failed to warn the commanders on the ground in Hawaii. Washington had broken the Japanese naval code as well as its diplomatic code and knew everything.

Pearl Harbor was a direct consequence of FDR’s own war-mongering policies, specifically designed to force Japan into firing the first shot. FDR wanted war and was privately moving heaven and earth to drag or trick his anti-interventionist countrymen into the bloodbath, all while proclaiming the opposite in public. (Wilson had done something similar prior to entering the Great War. His 1916 reelection campaign slogan was “He kept us out of war!”) The day after the “surprise” attack on Pearl Harbor, FDR gave the greatest speech an American president ever delivered. December 8th, 1941’s “day of infamy” oration to a joint session of Congress was stupendous. The fact that it was mendacious, hypocritical, and extremely dishonest is another matter.

For FDR, Pearl Harbor was a godsend. It transformed him into a wartime president, a dictator for life. The Imperial Presidency was enthroned. Congress would henceforth be a nullity, or at best a gadfly, in foreign affairs. The United States has lived under this unhealthy, unconstitutional circumstance ever since. The powers that be are pleased with the arrangement. It gives them more freedom of action. And that is what Team Obama needs going forward: A patriotic extravaganza, a distraction in which Barack Obama becomes once again a hero figure, the center of attention, like he was on the campaign trail in 2007 and 2008.

“Patriotism is the last refuge of a scoundrel. In certain cases, it may even be the first choice.”

Both Walt and Buchanan are dead right when you apply their thinking to Washington’s Iran policy itself. But both Congress and the press have wholeheartedly embraced this bipartisan, bellicose policy toward Iran for years. It may be more appropriate to ask, “What have Barack Obama, Dick Cheney, G. W. Bush, and Capitol Hill officials been smoking all these years?” and then, “Has Washington lost its mind?”