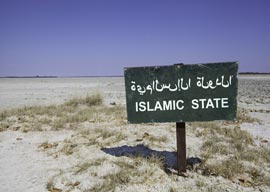 Fourteen years later, Christianophobia is the norm in places like Turkey and Egypt, while in Pakistan and in the Gulf being a Christian is almost a death sentence. In Turkey, a backward country run by crypto-fanatics, Christians have to register their religion in their identity card, and the word Christian means the bearer is excluded from many forms of public service. Christian schools are tightly controlled, yet the EU gang was pushing hard for Turkey to become a member of the European Union until Erdogan revealed his Muslim tendencies of Salafist hate.

What Europe and America should do is to take in only Christians from the Middle East and expel all Muslims who have ever uttered one word in defense of ISIS. It’s called quid pro quo, but when the Saudis have half of Washington, D.C. in their pay, my plan seems unworkable. Yet in the light of horrors now being committed against Christians in Muslim-majority countries, something has to be done. If we had a Christian president like Teddy Roosevelt””Perdicaris alive or Raisuli dead!””we might have a chance to be taken at our word. But not after a Bush who was busy holding hands with the head towel and Christian hater Abdulla of Saudi Arabia while the bodies of 2752 Americans were still being dug up.

Here’s what the friendship with the Saudis has brought us, and by us I don”t mean Halliburton: trains and hundreds of dead blown up in Madrid, 52 killed in London on buses and subways, Western journalists beheaded in Syria, Jews slaughtered in Belgium and in France”and in all this time since 9/11, all our leaders have done is to repeat ad nauseam that Islam is a peaceful religion and only a few Islamists wish us ill.

Islam is not a peaceful religion, but a murderous one, and most Muslims wish us dead. The quicker we get used to the fact, the better off we”ll be.