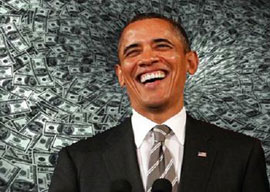 There is no doubt in my mind that we wish our destruction. What else could it be? An Elders of Zion plot? Hardly. They would be among the first to go down, although unlike us, they would put up a fight.

The only thing I can think of is extreme stupidity. Take the cases of John McCain and Lindsey Graham, Republican senators who traveled recently to Egypt. McCain has an excuse. He was chained to a wall and tortured in the Hanoi Hilton for five years. Men’s minds crack under pressure, and poor old John’s is not what it was before his extended stay in Hanoi. But Lindsey Graham? He was supposed to be among the more intelligent politicians. What’s his excuse? Urging a suspension of aid to Egypt’s armed forces is like asking for more arms to be sent to al-Qaeda’s fighters in Syria”an approach that is deadly for Western interests, as shortsighted and catastrophic as the overthrow of Saddam Hussein was ten years ago.

“Is there no one intelligent enough to realize that Islamism means the introduction of sharia law wherever it governs?”

An otherwise decent commentator named Roger Cohen blames Uncle Sam and Obama for not getting Egypt right. It is OUR fault that Morsi did not reach out beyond the Muslim Brotherhood to be more inclusive. Obviously Roger Cohen has been slipped an LSD cocktail and has blown his mind. The New York Times, the Financial Times, the BBC, and the rest of the liberal media in the US have been predictably pro-Islamist and wrong in siding with the extremists. They have been hoping for our destruction since Uncle Sam became a superpower following WWII. This is despite opinion polls showing overwhelming majorities on both sides of the Atlantic opposing Western military aid to Islamists, or even more for intervention in Syria and Egypt. Yet the US and the awful EU continue to issue statements against the Egyptian government as well as the Syrian Assad regime, both fighting an uphill battle against radical Islam.

As in Chicago of the 1930s”where businesses paid protection money to the Mafia”the Gulf States, starting with Qatar, financed and armed al-Qaeda and the Muslim Brotherhood and their loose alliances with similar groups to protect themselves and their oil and gas riches. It was as simple as that. The odd man out is Saudi Arabia, which feels it is strong enough militarily to keep its ill-gotten oil money without having to pay ransom. Once the Gulf thieves made their unholy alliance with radical Islam, up sprang the Arab Spring. Western media fools called it a democratic expression of Arab millions. It was, partly. Millions were swept away by false promises until reality set in, especially in Egypt. Now the genie is out and there’s hell to pay, but the West’s leaders, like Captain Smith onboard the Titanic and just as oblivious to the dangers ahead, are speeding up their calls for democracy in lands where the “D” word is as alien as dictatorship is in Massachusetts.