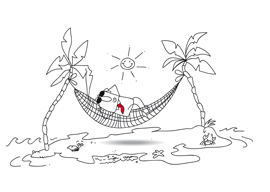 I was a bit surprised to learn recently that the BBC radio program Desert Island Discs (hereinafter DID) is still on the air.

DID is older than I am. It’s been broadcast every week since 1942. The intro music”seagulls, surf breaking on a shore”was part of the background acoustics of my 1950s childhood in England.

The format of the show is simple. Some celebrity is invited to imagine being marooned on a desert island with a wind-up gramophone, a Bible, and the works of Shakespeare. The castaway gets to choose eight musical selections, one extra book, and a luxury item.

Our esteemed proprietor was the castaway on November 28th, 1993. “Contains language which some may find offensive,” warns the cover page. Oh, Taki, Taki.

My own chances of appearing on DID were never great, but are now receding in sync with my hairline. Still, for posterity in general, and my children in particular, I should like to have my choices on record. Since the BBC is never going to do the recording job, it”ll have to be Takimag.

My selections need some prefacing.

“I stopped paying much attention to new things 20 or 30 years ago. It’s what happens. If you haven”t found out yet, you will.”

One: I am not musical. Although not as deeply un-musical as Ulysses S. Grant (“I only know two tunes. One is “Yankee Doodle” and the other one isn”t”), my tastes are lower-middlebrow. Supposing there is a musicality quotient analogous to IQ, with mean 100 and standard deviation 15, I”m no better than a 95.

Three: I”m a geezer. I stopped paying much attention to new things 20 or 30 years ago. It’s what happens. If you haven”t found out yet, you will.

OK, my eight musical choices; one from each category of music I like.

Christmas songs and carols.  The first Christmas I can remember was 1948, when I was three years old. My principal Christmas present was a wind-up clockwork train that ran on a little track.

I am playing with it on the floor in the living room in front of a coal fire. My father is sitting in his armchair by the fire. He’s in a good mood, smiling. From the radio on the shelf behind him comes Bing Crosby singing “White Christmas.”

It’s all so clear, so warm, so happy. How did the Devil come? When first attack?

Hymns.  Every morning of my school life, ages five to eighteen, began with a hymn, sung by the whole school. Imprinted on you like that, those lovely old Anglican hymns never leave you.

I”d be hard put to name a favorite, but Lyte’s “Abide with me“ is up there near the top. “Heaven’s morning breaks and Earth’s vain shadows flee.”

Folk songs.  The British Isles have a great tradition of folk songs. We got some of them in school music lessons, others we picked up from our elders, yet others were popular in the 1960s folk boom.

“O No, John” will do as a representative of the genre. It reminds me of my years as a single man, of which there were too many. For a rather good off-the-wall rendering, try the Red Army Choir.

The American songbook.  The second quarter of the last century was a golden age of popular songs: clever, inventive, melodically interesting, and grown-up.

Nobody wrote those songs better than Cole Porter; nobody sang them better than Ella Fitzgerald. In the song “Ev”ry time we say goodbye,” the two came together in something close to perfection.

For lunch have a whiskey and soda””¨That oughtta help you to lose.”¨No whipped cream, no butter;”¨Just lie in the gutter”¨And booze, booze, booze!

Pop.  I lived through the whole rock revolution. What a ride! It seems absurd to pick one song from that glorious profusion. Since I have to, I”ll take the Beatles” “Yes it is,” for personal and sentimental reasons; but if asked on another day, I”d probably pick a different number.