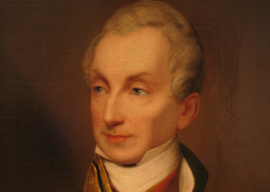 Needless to say, Papa Hemingway would be included. I wonder what Alcibiades and Talleyrand would make of Papa? Hemingway’s style cannot be imitated because it comes from inner necessity. Thousands have tried, but their writing remains an imitation. Papa was haunted and wrote hauntingly. He’d be great with Alcibiades about nature and rivers back then, but cool to Talleyrand’s exquisite manners. Or maybe not. Hemingway appreciated the old aristocracy, as long as they were not too stupid, something the old fox certainly was not. But he wouldn’t bring up women. He was old-fashioned and I’m sure the Greek and the Frenchman would have understood.

Finally, I’d have Prince Metternich as the fourth—a great seducer. He was late for a conference and a whole province was lost to Austria when the winners were redistributing real estate. When he was informed, he sighed and said, “But she was worth it.” When the Greeks asked for the King of Rome to become their first monarch after the liberation in 1827, Metternich refused. He knew Napo’s son was tubercular and the mild Greek climate would prolong his life. He kept him in Austria and the young man died in his early 20s. Metternich did not wish for too many Napoleonic descendants around.

So the next time you plan a dream imaginary dinner, give a thought to poor old Kim and Kanye, and don’t forget Justin B.