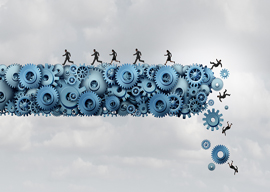 Well, that is damned inconvenient. A state-of-the-art pedestrian bridge hailed as the inevitably wondrous result of diversity in engineering has collapsed within days of being paraded before the media. Did I say inconvenient? I should have said symbolic.

“Diversity Bridge” (that’s not the structure’s official name, but I think it fits) was designed to connect Florida International University to the city of Sweetwater, where many FIU students and staff reside. The bridge, installed (though not yet opened to the public) a mere four days before its failure, spanned a busy Miami highway, and the collapse crushed cars and people underneath. Authorities report at least six deaths.

Prior to pancaking, Diversity Bridge had been championed as “an engineering feat come to life.” One of the geniuses who accomplished this “feat” is an engineer who was hailed by President Obama in 2015 as a “champion of change”: Atorod Azizinamini, director of FIU’s Accelerated Bridge Construction Center (now renamed the Accelerated Bridge Destruction Center). The firm that built the bridge, Munilla Construction Management (MCM), is run by the Munilla brothers—Raul, Juan, Jorge, Lou, Fernando, and Pedro (is that a construction firm or the latest incarnation of Menudo?). And then we have Leonor Flores, MCM’s senior manager. On March 14, as Diversity Bridge was being installed, Flores was quoted in this breathless puff piece on the FIU website:

Twelve-year-old Michelle Flores shared a special moment with her family at FIU this past Saturday: She and her sister Gabriela joined their parents, FIU alumni Leonor and Henry Flores MIS ’01, to watch a 950-ton section of a pedestrian bridge swing into its permanent position across Southwest 8th Street. Leonor Flores ’98 is a project executive and one of 63 FIU alumni who work for MCM, the construction firm building the FIU-Sweetwater University City Bridge. She was excited to share her work with her family, especially Michelle, who is interested in STEM (science, technology, engineering and math) in school. Said Leonor: “It’s very important for me as a woman and an engineer to be able to promote that to my daughter, because I think women have a different perspective. We’re able to put in an artistic touch and we’re able to build, too.”

She’s an artist, all right. That bridge became a pile of junk art that would have made Arman jealous.

“These days we live in a world in which ‘diversity’ is the goal, rather than competence.”

Needless to say, the day after the collapse, damage control needed to be done, and fast. The piece on the FIU website was updated (in bloodred letters, no less) to read: “To clarify, Leonor Flores did not work on the FIU-Sweetwater University City Bridge project in any capacity.” Funny, because in that very same piece the bridge is referred to as “her work.” On its Facebook page, MCM deleted tags with Flores’ name. Also deleted (but archived by me) was a March 8 post declaring: “A strong woman looks a challenge dead in the eye and gives it a wink. Thankful for all of our MCM women who help us overcome challenges every day and #BuildExcellence. #HappyInternationalWomensDay #WeAreMCM.”

A wink? Personally, I prefer engineers who keep both eyes open while looking at challenges.

To be clear, I’m not saying that bridge design is some kind of exclusively white male endeavor. To even suggest such a thing would be ridiculous. But these days we live in a world in which “diversity” is the goal, rather than competence. Who cares if a few bridges collapse? Do we really expect leftists, who still champion communism even after it cost a hundred million lives in the previous century, to worry about six dead motorists?

Nevertheless, common sense should have dictated, finish the damn bridge before you turn it into a “take your daughter to work” PR stunt. But to the left, no engineering feat is even remotely as important as the “self-esteem” of women and nonwhites. That is the new top priority in STEM. It should be noted that in the months prior to the bridge collapse, FIU was awarded millions of federal dollars to “diversify” its STEM classes. And even after the disaster, FIU’s president, Mark Rosenberg, defended the project, claiming that at least they were trying to “build a bridge, not a wall.” Yes, a fucking pedestrian bridge is now a symbol of anti-Trump “resistance.” In a perfect world, the fact that Rosenberg tried to excuse the death of six people by saying, “Hey, at least your loved ones were crushed by something that is symbolically anti-Trump” would lead to his immediate dismissal. In our imperfect world, however, it will probably lead to him having his own show on MSNBC.

Whatever brought down Diversity Bridge, the fact that the people involved in the project were turning a simple pedestrian walkway into some kind of victory lap for women in STEM has shifted the story from a mere bridge failure to a cautionary tale about what happens when “diversity” overshadows ability.

There’s an old saying I just made up that goes, “The good Lord smiles upon the columnist with a long memory.” The saga of Diversity Bridge prompted me to recall another bridge disaster, a much worse one, which occurred 25 years ago. And though separated by a quarter century, both stories share the same moral.

On the evening of Sept. 22, 1993, the Amtrak Sunset Limited, en route from L.A. to Miami, derailed while crossing the Big Bayou Canot bridge in southwestern Alabama. The train plunged into the waters below, and its exploding fuel tanks created a hellstorm that set the water afire. Forty-seven people perished in what is still the worst accident in Amtrak’s history. The disaster occurred because a barge pilot had slammed into one of the piers of the bridge, knocking the tracks out of alignment. To make matters worse, the pilot was off course, in the completely wrong body of water.

So how does that happen? How does a pilot pushing six barges full of coal, steel, and concrete find himself on the wrong river heading straight for a bridge, which he fails to avoid, taking the lives of 47 people?

Ask Willie Odom, the pilot in question. And lest anyone think I’m being unfair in my description of him, I’ll leave that part to The New York Times: “The pilot, Willie Odom, could not read his radar, had left his chart of the river at home and did not have a compass.” The Times added that “he had no formal training,” and “he had received his piloting license only months before, after failing the exam seven times.” Since I’m sure the name totally didn’t tip you off, I’ll mention that Mr. Odom is black. And indeed, he had no formal training, was unable to read radar, had left his charts at home, possessed no compass, and had failed his licensing exam seven times. That night in 1993, he was supposed to be on the Mobile River, but he took a wrong turn in the fog, ending up in the Bayou Canot. And he wasn’t even aware he’d hit the bridge until he saw the fireball from the exploding trains. At that point, he exclaimed, “Oh Lord, I done made the wrong turn” (I wish I were making that up, but that’s his actual quote).