Does it Matter if Hillary Clinton Is a Carpet-Muncher? 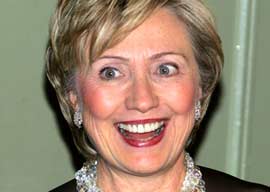 Yet in the same interview where she claimed Bill Clinton told her that Hillary was a serial cunnilinguist, Gennifer Flowers blurted out something that might give all American men even more reason to be terrified at the prospect of a Hillary presidency. Flowers claimed that despite all the bad blood between them over the fact that they”ve shared the same penis, she would vote for Clinton should she run in 2016:

The support I would give Hillary is as a woman. I”m one of those women who in so many aspects of my professional and personal life I”ve been out there making strides for women and allowing them to go down roads in which they were not welcome….I would love to see a woman president.

Where have we heard that sort of sentiment before? Oh, right””I would love to see a black president.” And instead of the post-racial utopia we were promised, we”ve now seen six years of ceaseless and escalating white-bashing. And unlike the puny 13% of the electorate that blacks comprise, women make up around half of all voters. And as many men realize but are perhaps too gelded to admit in public, many if not most women have an axe”or, more precisely, an axe wound”to grind with men.

Since 2008, Democratic shysters have deflected the merest criticism of Obama with the word “racism,” a dumb and meaningless term that still somehow has the capacity to cripple nearly anyone at whom it is flung. Should Hillary Clinton ascend to the presidency, you can bet your last testicle that no matter how extreme her policies, anyone who dares question them will be shouted down as a misogynist. She could call for the ritual televised castration of all male infants, yet anyone who made a peep about it will be smeared as a woman-hater.

It is also well-known that Hillary Clinton is an impenitent war hawk. For all that we hear about how men who love guns and missiles are compensating for penile deficiencies, how much more would this apply to someone that nature has saddled with a mere clitoris?

Let’s throw reason to the wind and assume that Clinton is a full-on heterosexual woman. If that’s the case, she publicly endured humiliation at the hands of her philandering hubby. Hell hath no fury, and all that. If she were to be placed in the world’s ultimate power position, this would not bode well for men. Considering all this, one could only hope that she’s a lesbian.