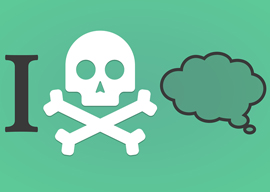 Facebook is a cancer that, for reasons that remain mysterious to me, nearly two billion users worldwide seek to inflict upon themselves. Its owner Mark Zuckerberg is worth a reputed seventy-seven skadillion dollars, and if he were to choose, this pint-sized “progressive” could easily feed all starving children in sub-Saharan Africa a hot turkey sandwich every day for the rest of their livelong lives—with gravy and stuffing!

Instead, he is focusing his sweat and ingenuity toward eradicating “hate speech”—a term which I hate—from Facebook.

When he and that ashen, Uncanny Valley face
of his appeared before Congress in April, Zuckerberg predicted that artificial intelligence bots would be able to wipe every last speck of hate speech from Facebook over the next five to ten years:

Hate speech, I am optimistic that over a five to ten year period we’ll have AI tools that can get into some of the nuances, the linguistic nuances of different types of content to be more accurate in flagging things for our systems, but today is just not there on that….Hate speech is one of the hardest, because determining if something is hate speech is very linguistically nuanced.

Until then, Zuckerberg lamented, much of the hate-speech hunting will have to be done by humans. And humans, as we know, often make mistakes.

Last Wednesday morning for about twenty minutes, Facebook users in the USA saw a new custom button at the bottom of each post that asked the following question:

“We are in the throes of a moral panic engineered by children. Dangerous children. Children with their grubby little fingers on the levers of power.”

This message appeared under every Facebook post, so if it was a picture of your grandchild, you’d be asked whether it contained hate speech. If it was a stock photo of a cat sitting on a windowsill and squinting serenely, you would be asked if that, too, constituted hate speech.

Users could select “yes” or “no,” whereupon they’d be directed to further options such as “Test P1” and “Test P2”—and if those options don’t make any sense, that’s because Facebook’s Hate Squad was still testing a script and it accidentally went live. They released an official statement explaining the screwup:

This was an internal test we were working on to understand different types of speech, including speech we thought would not be hate.…A bug caused it to launch publicly. It’s been disabled.

That’s all well and good that it’s been “disabled,” I suppose, but the fact remains that for 20 minutes last week, the one tech company that can be said more than any other to hold a monopolistic stranglehold on social media is testing out scripts designed to purge all “hate speech” from its platform.

A direct attack on people based on what we call protected characteristics — race, ethnicity, national origin, religious affiliation, sexual orientation, sex, gender, gender identity, and serious disability or disease. We also provide some protections for immigration status. We define attack as violent or dehumanizing speech, statements of inferiority, or calls for exclusion or segregation.

And this is, was, and always will be the problem with this childish notion of “hate speech”—not only can’t it be quantified, it can’t be proved to ever lead directly to violence since, as we all at least used to seem to understand in kindergarten, words and actions are two different things.

Facebook allegedly “began to tackle hate speech” around 2005. According to former Facebook general counsel Chris Kelly, the alleged proliferation of “Holocaust denial” on the platform was a huge incentive to go on an anti-hate jihad. But in 2008, the company’s guidelines were still hopelessly vague. According to one employee, a one-page list was distributed that banned specific items such as nudity and Hitler—and, one would presume, nude selfies by Hitler—but at the bottom of the page included the vague admonition to “Take down anything else that makes you feel uncomfortable.”

Well, that statement alone makes me feel uncomfortable. But some nagging, shrieking, yenta-like voice inside my head tells me I don’t have a say on whether it gets taken down.

Over twenty years ago in my book The Redneck Manifesto I addressed the inanity of this whole “hate speech” thing, and I only repeat it here because nothing has changed—in fact, things have gotten far worse in the interim—and people didn’t seem to get the message the first time around.

HATE SPEECH is the most Orwellian concept to emerge from the 20th-century twilight. It is especially deceptive because it hides behind a Happy Face mask. Most people want to be on the side of love, right? Like all dangerous ideas, the notion of hate speech sounds good until dismantled piece by piece. The first problem is with the term’s vagueness. Hate speech, apparently, has become anything THEY hate. Through relentless exposure to well-meaning, soft-suds imagery, otherwise intelligent people have been brainwashed to believe that “hate” is a satisfactory explanation for any human action. Reducing complex socio-political struggles to a matter of “hate” is as simplistic as blaming it on “sin,” but they fall for it.

What remains unchanged since I wrote those words is that “hate speech” is just as vague a concept as it was two decades ago—that will never change because the term by its very nature is subjective. “Hate speech” is solely in the eye of the beholder in a way that recalls Supreme Court Justice Potter Stewart’s infamously blurry definition of obscenity: “I know it when I see it.”

What has changed is that since the 1990s, the term “hate speech” has expanded like a rapidly blossoming tumor to cover so many things that weren’t “hate speech” back then—for example, the word “tranny.” Or being against illegal immigration and gay marriage.

And back then, a “joke” was not the same thing as an “attack.” If anything, a joke was an attempt to defuse tension and evade a possible attack.

Those who, like Facebook, seek to squash free speech by creating a false category known as “hate speech” attempt to argue it causes a “clear and present danger” to public safety.