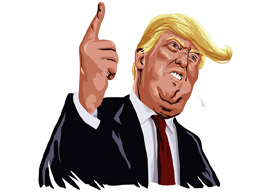 Then you”ve got the “conservative Christian values” reason. Really? With Donald Trump? I don”t think I even need to go there.

That one is closely related, of course, to the “Trump hates women” reason, because, as we all know, all conservative Christians are patriarchal oppressors, if not pedophiliac polygamists. At any rate, presumably there’s a woman-hating voting bloc. That’s why Hillary made such a big deal about being the first woman Democratic nominee, a theme taken up by the mainstream press with such enthusiasm that the New York Times headline was a six-column 42-point Bodoni Bold streamer with the word “historic” in it. With all the celebration, someone forgot to inform them that Hillary is not yet President. And even if she wins, she”ll be joining 18 other women who are already heads of state. And even if you try to put it in context, the “first woman” thing kind of falls apart when you consider that the first woman head of state was in 1960 (Sri Lanka), and since then we”ve had Indira Gandhi (1966), Golda Meir (1969), Isabel Peron (1974), Maggie Thatcher (1979), Corazon Aquino (1986), and we”ve even had two extremely sexy ones”Benazir Bhutto in Pakistan and Yulia Tymoshenko in Ukraine”to demolish the once current view that all female leaders should be post-menopausal broad-shouldered matrons with starched hair. If Hillary does become the first female President, we should give her the Ulf Merbold Award. If you go into any office of the European Space Agency, there’s a picture of this goofy grinning guy named Ulf Merbold. That’s because he was the first European astronaut on the first purely European space mission at the fairly irrelevant date of 1984. When you”re a female leader following in the footsteps of women from such bastions of feminism as Bolivia, Haiti, Rwanda, Peru and the Central African Republic, it’s not exactly headline-worthy. My point: women are voting for Trump, too, often because they just can”t deal with the pants suit.

But I digress. What else do we have on the Idiot Trump Voter list?

You”ve got the authoritarian reason, the idea that Trump voters want “a strong man like Putin.” Yeah, really? Would that be the same Scots-Irish people who followed John Knox, got kicked out of the Lowlands, caused all the ruckus in Ulster County, fought the Whiskey Rebellion in western Pennsylvania, and spread out through the Ohio Valley and Appalachia and the Deep South so they could get away from all governments? Yeah, right, those people want a dictator.

Okay, look, here are the only two things you have to know about Donald Trump’s popularity.

First, stop with the psychoanalysis. Trump doesn”t believe anything. Trump is like Luminol. Luminol is the chemical used on Forensic Files to find blood after the crime scene has already been scrubbed. You just spray Luminol all over the floor and walls, and if human blood has ever touched anything in the room, it will phosphoresce like a red-headed hobo’s nose after seven bottles of Night Train. So Donald Trump is Human Luminol. He doesn”t have any real opinions. He just seeps into an environment like a grievance-seeking gas. He finds whatever people are mad about and says “I can fix it.” He probably can”t fix it, but he’s talking about things that nobody else wants to fix. He sees the blood on the floor.

Second, it’s the very people who hate Trump the most who created Donald Trump.

There are all kinds of ordinary people who are gonna vote for Trump, and they”re not chasing a mythical golden age, and they don”t wear hard hats, and they don”t wanna live under a dictatorship. They”re what’s referred to in the mainstream press as “working class””a strange term implying that they”re to be feared because they”re out there working instead of doing what the other classes do. Running Silicon Valley start-up deals? Managing trust funds? I don”t know why the Democrats, especially, equate “working class” with the Angry White Man, but they do.

My point is that the Donald Trump voters have consistently told us why they”re voting for Trump, but it doesn”t fit any of the stereotypes and so it’s never mentioned. What’s the first thing out of a Trump voter’s mouth when he’s asked about it?

It’s a political movement based on the First Amendment.

Shouldn”t we, at the very least, be looking at why 40-plus-percent of the American population would feel stifled and silenced? Shouldn”t this be what we”re examining instead of the cerebral cortex of Donald Trump’s addled ego? Wouldn”t this be the reporterly thing to do?

So why do they feel muzzled? It probably started with something minor. Their third-grade son gets sent home for calling a girl “fat” in the school yard. But it doesn”t end there. The parents are called in. The student is required to attend Soviet-style reeducation classes. When the parents complain that “you”re making a big deal out nothing,” they are reminded that their progeny may have damaged a tender young girl for life.

(What the parents could have done is use the episode as an opportunity to explain libel law. If the girl was in fact fat, then the remark was protected speech because true. If she was not fat, or her weight was considered merely chubby, the remark might be actionable in a civil court and best avoided. This would be separate from the traditional reprimand of all moms to “respect the girls, including the fat ones.”)

And so, from a very early age, their kid is taught that he has to shut up about certain things. When a guy named al-Khalifa Mustafa bin Muhammad bin Chaka Khan shoots up a synagogue in Atlanta or slits a priest’s throat in Budapest, most Americans assume that a) he’s a Muslim, b) he’s a radical terrorist, and c) he should be shot on sight and his associates should be jailed or executed. But don”t say this out loud. There are local committees”and, again, it’s likely to come from the school”imploring our communities to “assume the best about all religions” and “resist the temptation to profile.” After all, there might be radical Jews or radical Christians bursting into mosques with AK-47s.

Most Americans have no problem with profiling. Most Americans would willingly submit their data to a profile if it made the community safer. But again, they feel they”re not allowed to speak up about that.

And then there are the examples with real, immediate consequences. A private joke at work becomes a disciplinary matter and possibly a loss of employment. An allegation of “sexual harassment” based on locker-room humor turns into an article in the paper and a civil lawsuit. Your daughter goes to college, gets the female lead in Carousel, but is told the drama teacher will be rewriting the final speech because it’s considered politically incorrect. You”re constantly put in situations where you”re not sure whether to mention your church affiliation for fear of being branded a yahoo. You post some photos on Facebook of your child’s first deer hunt and you”re smothered with online abuse as a Neanderthal killer and child abuser. God forbid you say something with a racist tinge, lest “hate speech” laws send you to jail.

Most Americans don”t believe in dividing speech into “protected speech” and “hate speech.” Most Americans believe that all speech is protected, even speech that some people regard as hateful. Most Americans think it’s okay to be an old coot with unpopular opinions. Most Americans feel that the federal government should get out of their business. And many Americans blame the Supreme Court for allowing the national social norms, set in New York and Washington, to filter into their communities in Wichita Falls, Boise and Spokane. They fear Hillary because they fear that more of their speech will be taken away, and more of their local control. They don”t love Donald but they know he”ll “say whatever he wants.”

They remember a time when they could also say whatever they wanted to say, too, but that time was more than thirty years ago. Meanwhile, there’s some guy at the Daily Arapaho telling them they”re idiots for voting for Donald Trump. They remember that guy, he’s the snooty one who went to McNeese State. He’s a clueless media type. Otherwise he would know that they”re not voting for Donald Trump because he’s a swell guy, they”re voting for the restoration of their personal liberty. Fortunately for their cause, the very fact that the media opposes them means they”re even more certain that it’s the right decision.

What a bunch of yahoos. They”re probably working class. We would never let them pledge Kappa. Maybe we should consider some “yahoo speech” laws. Call Hillary.