Don’t We All Wear Masks? 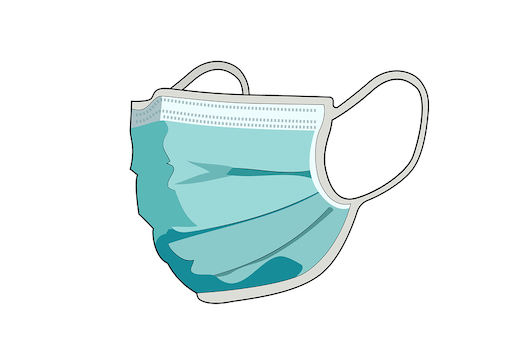 Shocked, my fiancée regaled me with stories of her experiences on the Tube: “They were all wearing masks!”

The rules of social etiquette in the city are well-defined: Don’t make eye contact, and for Christ’s sake don’t make conversation; do pretend the buskers on the Tube aren’t there, even if they’ve formed a mariachi band. In short, learn to be invisible, and treat everyone else with the same courtesy.

Yes, we’ve all been wearing masks (figuratively) (but also, literally).

This is not just a corona craze. In the months leading up to the coronavirus, Brits went mask-mad for a bizarre talent show called The Masked Singer. Every Saturday night, the ratings-topping program was experienced like a ketamine-induced fever dream, with crowds pointing, laughing, and jeering, “Take it off! Take it off!” at costumed singers. The costumes themselves looked like Where the Wild Things Are had been made into a B horror movie; the show’s winner wore a mask that said, “I’m going to murder your family in their sleep.”

Elsewhere, antipollution masks are set to reach $4.8B worldwide by 2025; and retailers like Boohoo.com sell skull bandannas as Antifa-chic masks. In short, the trend toward face masks is nothing new. Perhaps the coronavirus is an external rationalization—a mask, if you will—for the true reasons we’ve all gone mantle-mental.

The first reason is that society is disgusting. Overcrowding has been accompanied by a nihilistic lack of standards since even before John Lennon lustfully imagined nothing worth dying for. As a result, modern life is physically repellent. The streets of San Francisco are paved not with gold, but with human shit; in London, an analysis of touchscreens in McDonald’s found that every single one had a trace of feces.

“Perhaps the coronavirus is an external rationalization for the true reasons we’ve all gone mantle-mental.”

The TV schedules are packed with shows glorifying casual dating; the jewel in the crown is surely Naked Attraction, which purports to do “dating in reverse.” Do the contestants start by getting married and then work backwards from there, you ask? No, they start by methodically examining each other’s genitals.

The West is in steep spiritual decline, observable in physical symptoms.

I recently visited Paris, the city of romance, where the streets were littered with used needles and the Metro stank of piss. I visited La Defense, where the architecture was brutal, ugly, and dehumanizing. The Notre Dame it was not—but of course, the Notre Dame had burned down. Its beautiful spires, which had once reached toward God, had decayed into soot, blowing among the garbage of Parisian streets.

Political psychologists have theorized that conservatism may be a “behavioral immune system” that protects groups from threats. When people experience disgust or feel vulnerable to infection, they endorse conservative politics; for example, respondents in one study scored more conservatively when completing the survey next to a hand sanitizer. In countries with higher incidence of parasites, people tend toward conformity, loyalty, and purity. Conservatism is rising across the Western world; in a behavioral sense, we can expect to see more face masks, fewer handshakes, and more stockpiling of toiletries.

There is a second reason why masks are trending.

One of the great mask memes is Guy Fawkes from V for Vendetta. In the movie, citizens wear the mask to defy an authoritarian government, following the lead of an anonymous hero. In real life, the symbol has been adopted by the hacker movement Anonymous, cultivated in the anonymous fora of 4chan, which BBC News called an “extreme free speech message board.”

This anonymity-based freedom is something people desperately crave.

On the one hand, we are all under 24-hour surveillance; we used to be watched from the Heavens by God; now we are watched from the Cloud by some other three-letter combo. It is no surprise that the use of masks is increasing where the police brandish facial recognition software.

Mankind yearns to be free from authoritarian rules, whether from above or from his fellow man. In a world obsessed with identity politics, the mask levels the playing field: “You can’t hate me for my skin if you can’t see it.” The “online disinhibition effect” refers to the tendency for commenters to say what they really think online (no matter how distasteful) when their identity is obscured; perhaps people are yearning for some of that release in the real world—to be able to speak their mind without fear of retribution from woke comrades.

Either way, our identity-obsessed culture is surely pathological; there is a reason Love Islanders keep killing themselves. Academic research consistently shows that narcissism levels are rising in the Western world, and narcissism is indeed a pathology. Perhaps masks are an immune-system response to a culture of pride that we implicitly recognize is harmful; perhaps, on some level, we know that being so self-obsessed is bad for us, and we wear masks to tamper individual self-expression.

Ultimately, whatever the reason for wearing masks, it cannot be reflective of a healthy culture. Rather, it is a physical manifestation of atomization, hostility, and distrust. The mask is a common horror-movie trope because the wearer, like a psychopath, expresses no emotions and feels no empathy; a masked society is a society of Leatherfaces. We are divided and disconnected, crammed into a behavioral sink where, like identical lab rats, we pass the time in violence and depravity.

However, like the infantry in the trenches of World War I, the mask may be a necessary evil, to protect us from the dangerous toxins of the world outside.