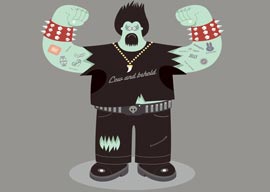 Kim Kelly’s breathless invocation of a “right side of history” is more than just an act of linguistic laziness: it underscores the quasi-religious nature of progressivism. There’s a teleology whereby leftist political positions are more than just one person’s opinion that can stand or fall on its own merits. No, these viewpoints are the necessary outcome of a deity they call History. They”re not opinions, they”re objective facts. Heretics, reject them at your own peril!

I”ve written about this general topic before: That Varg Vikernes was convicted of murder is bad. That he thinks thoughts some people don”t like is very, very bad and, apparently, the more important crime. Similarly, the prog would-be journos of the Internet want you to be very afraid of men who don makeup that makes them look like a cross between a confused panda bear and the Hamburglar: they might invoke imagery from a political movement that’s held no serious influence since the end of World War II in an attempt to shock and provoke.

Mock horror surrounding metal is about as fresh as three-day-old tuna steaks. If you”re my age or older you will likely remember the hysteria surrounding heavy metal in the 1980s. Back then, it was Tipper Gore and the PMRC, with an assist from congressional panels. There’s a certain not-so-subtle irony in seeing the role of thought police played not by dowdy senators” wives, but by a denim-and-leather-clad army of schoolmarms.

One distinguishing feature of metal is that it’s less encumbered than its cousin, punk rock. While sometimes antiauthoritarian, metal never carried punk’s pseudo-anarchist party line pretensions. Metalheads like metal bands if they”re good, not if they”re correct, whatever either might mean from one second to the next. This is why the scene has not just tolerated, but embraced black frontmen, homosexual frontmen, and frontmen who are now frontwomen. At gigs in the American Southwest and Latin America, whites are a decided minority, so what’s the big deal?

The big deal, so far as I can tell, is that someone somewhere might be having fun in a manner not approved by the local leftist mullahs. But in going after metal, our keystone kommissars have picked an almost aggressively stupid topic. There are few who are crustier and more prickly than metalheads, nor many more committed to hedonism for its own sake. Good luck getting them on the egalitarian bandwagon.

Wimps and posers leave the hall.