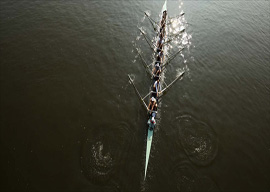 One onlooker told The Sun:

There was also a strange and scary book “ I think it was called Conflict or Die. He must have been reading it before we arrived. We were a bit freaked out. The book seemed to be about death. I thought he had been trying to kill himself.

Unfortunately, no. He was trying to disrupt the race, which he did successfully, leaving lots of very pissed-off people, including British Olympic Association chairman and Olympic rowing medalist Colin Moynihan, who coxed the 1977 Oxford team to victory on the Thames and said he felt for the rowers. Moynihan said:

These guys train for seven months, day in, day out”it’s their sporting event because it is just one race. You don’t have a whole season to look forward to.

Ivor Roberts, chairman of Vincent’s, the Oxford club for sportsmen, admitted to the Daily Mail it was a sad day:

One piece of grotesque selfishness and deluded self-importance ruined a harmless piece of enjoyment for thousands upon thousands on the banks of the Thames and countless millions of viewers worldwide.

The Oxford crew was doubly mad after losing the race. Karl Hudspith, president of the Oxford University Boat Club, Tweeted to Oldfield:

My team went through seven months of hell, this was the culmination of our careers and you took it from us.

Even his hometown newspaper called him a tool.

And that’s only a prelude to the Olympics, warns Oldfield. But come the Olympics in July, 25,000 guards, soldiers, and police officers will be swarming along the banks of the River Thames, nervous and itchy. And that security won”t be nearly as forgiving as it was last Saturday, where Oldfield was only cuffed and arrested for disturbing public order.

When I worked for the 2002 Olympic Winter Games, staff was given a creepy warning: Don’t act suspiciously, because at any time you could have a high-powered rifle and scope aimed at you. Make no sudden moves and never carry anything remotely resembling a weapon.

On the heels of September 11, 2001, threat levels were very real for the Olympics. Security was out there even if you did not see them. One friend, while backcountry skiing along the outside ridges of Park City, Utah during an Olympic test event, took a breather one sunny afternoon. Leaning against a tree, he threw off some gear and was about to catch his breath when the snow-covered floor erupted all around him. Narrowly averting a heart attack, he slowly realized it was a clutch of heavily armed security in white snowsuits. They lowered their guns and strongly urged him to move on.

My advice to Oldfield? In July, give us a show. Before you jump, act furtively and suspiciously, then yell, “Sic semper tyrannis!“ And man up at least. Lose the wetsuit.