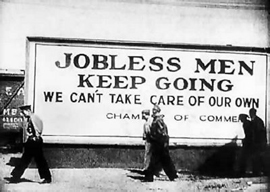 We had better start learning to embrace unemployment. There aren’t that many jobs anymore, and those that exist pay wages that barely make it worth getting out of bed:

The [Boston Business Journal] received an emailed tip this week from someone who says they’re an employed, Boston College Law School (BC Law) graduate. The tipster sent screen grabs of a job listing on BC Law’s career site. The post advertises a full-time associate position at a small Boston law firm, Gilbert & O’Bryan LLP, paying just $10,000 per year. (That’s $10K, it’s not a typo.)

Larry O’Bryan, one of the firm’s partners, said he’s received about 32 applications for the $10K per year job, since posting it one week ago.

My beautiful and talented wife, after several years of concentrating on child-raising, followed by a few more working part-time as a department-store sales assistant, decided to embark on a new career. She put herself through a course in Medical Billing at a local college.

I was a bit skeptical at first. Medical Billing? How hard can it be? Then she started bringing her course work home: great thick binders full of esoteric medical and pharmaceutical jargon, charts and graphs and tables. Thinking of a career in medical billing? Consider astrophysics instead.

To a person raised in East Asia, however, the course schedules and examinations of an American college are a joke, the merest bagatelle. Mrs. D. passed her course with straight A’s and verbose testimonials from her instructors. Then she went looking for work.

“We are plainly sailing into an era when only a privileged class will have jobs.”

She found it all right, but only as a temp. This field relies heavily on temps. I assured her that temping was just the thing at this early stage in her career”it would give her a breadth of experience she wouldn’t get while trapped in one cube at one office of one company.

As time went on, though, she began to hanker for a real job and the benefits that would go with it.

It seemed at last she might have found that job. For the first few months of this year she temped at a place she really liked, and where the managers really liked her”and just fifteen minutes from home! She was, though, filling in for people on medical leave, and eventually they all came back. Her manager, with whom she had bonded very closely, told her with tears in her eyes that they would have to let her go. They might be able to find a place for her at one of their other facilities in Remotetown or Distantville. My wife declined and left with sadness in her heart.

She: “None of those women will ever quit.” (Staffing at this place was mostly middle-aged and elderly women.) “They’d rather die in their cubes. I don’t blame them.”

A neighbor, commiserating: “There aren’t any jobs anymore. My firm only hires temps and contractors now. Employees are just too expensive.”

My son, a high-school junior who will turn 17 in July, needs summer work. He is capable and intelligent, if a little unpolished. I sounded out friends and ex-colleagues in the New York City finance sector. Any kind of drudge work would do: data entry, office gofer. They shook their heads sadly. “The college kids snaffle all those jobs now….”

I have become aware, too, that for the generation or (gulp!) two below me, a job is a mighty precious thing. When National Review dropped me back in April, younger friends and neighbors were astonished at my insouciance. “How can you not mind? You lost a job!“