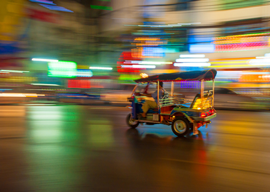 You”d think American workers could get some scraps off the table of globalism. Fine, most of our middle-class manufacturing jobs have been shipped overseas, and restaurant grunts have been shoved aside by cheaper labor from parts south (and robots). Even the IT department looks scared.

But we”re still native speakers of the business lingua franca. Vacations in beautiful locales may no longer be affordable”but if we”re willing to follow the jobs as they”re siphoned away, we should at least be able to make a good paycheck out there teaching English to our replacements.

Yeah, well, that’s not how it works.

Expatriate blogger “English Teacher X””his rants against corrupt and stupidly run schools necessitate the pseudonym”began teaching English abroad in the early 1990s. He had a little wad of money from his family to travel with, but the cash ran out before his wanderlust did, so he latched on to teaching. He found that even in the early days of NAFTA, the increased demand for native-speaker English teachers had already been drowned by the supply of Anglophones who wanted adventure, low cost of living, and/or desperate third-world women.

The hours were crazy and the wages barely supported a typical teacher’s drinking habits, much less the savings that “X” had hoped to rack up. Even the market for girls was no longer what he”d hoped it would be.

“I suspect that as a storyteller, his true addiction was to the endless buffet of material that the situation and cast of characters”rich, spoiled students; sociopathic managers; unhinged teachers; mercenary girlfriends”laid out for him.”

But he stuck it out, teaching in East Asia through the 1990s before moving to Russia in 2000; nine years later he moved on to a Gulf nation he refers to only as “the Kingdom” (he really doesn”t want employers to figure out who he is). All the while he’s dutifully mythologized his adventures, while giving practical advice for teachers, on his long-running, humorous blog, one of the first devoted to the profession.

Over the years the blog gained enough of a following that when X began to organize his memoirs and advice into e-books in 2011, they kicked off selling 50-200 copies a month. He has two new releases out this fall; the latest, Surviving TEFL (“teaching English as a foreign language”), is a compilation of three books of classroom tips. It’s fun even if you never plan to teach, and these days you can never be sure what you”ll end up doing to drag home the gravy.

But his other new release, Requiem for a Vagabond: Middle Aged in the Middle East, is a more interesting departure.

At the surface level, most of X’s writing implies that he got stuck in his awful profession because he became addicted to the drama of a romantically scruffy, drunk, womanizing expat’s lifestyle. But I suspect that as a storyteller, his true addiction was to the endless buffet of material that the situation and cast of characters”rich, spoiled students; sociopathic managers; unhinged teachers; mercenary girlfriends”laid out for him.

Requiem is the final volume in what X calls his “burnout trilogy.” The first book, To Travel Hopelessly, details his fledgling years as a miserable drunken teacher, sometimes tediously; the more well-written Vodkaberg describes some even worse years, during which X found out that while they may be gold diggers, Russian girls are just as addictive as collecting narratives.

Like many a writer, he found out too late that the hunt for material was more soul-destroying than he”d bargained for, possibly more so than it was worth. This is how he describes himself at the beginning of his nine-year ride through the ethanol-drenched bowels of Vodkaberg:

Six solid years of traveling had turned me into a scarecrow, a sock puppet; a thing with no connections, no roots, no convictions, and only a vague history. I was like some empty derelict wandering ghost-ship. … I feared having to move suddenly again.

Almost a decade’s worth of beer by the liter and tail-chasing later, he found he was ready for a level of austerity that most Westerners would find appalling: he took a job in the Middle East. “The Kingdom” was particularly strict, with no legal booze and niqabs for all the ladies (though the pay was head and shoulders above what he’d made in Russia).

Not that X is an apologist for Islam. His hypothesis as to why the Islamic countries breed extremism is simple: they keep women inaccessible to young unmarried men, so the latter get cranky en masse.

On the other hand, to a fellow who”d been marinating in alcohol and the aggressions of newly liberated Russian women, the austerity of the Kingdom was the counterbalance he needed. As opposed to the glamorized debauchery of his earlier books”in which he half-heartedly stuck pins in his own self-mythologizing, not very convincingly”Requiem is sincerely devoted to feeling out the golden mean.