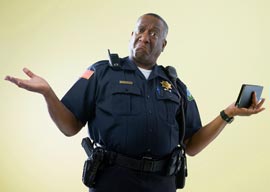 So far, for dead cops, we have Officers Ramos and Liu, who were sitting in their cars in a shitty neighborhood waiting to risk their lives to rescue ingrates from one another. A 28-year-old black man (and Muslim convert) made it very clear he was going to kill cops in retaliation for Brown and he made “pigs fly,” as he put it. We had Officer Brian Moore assassinated in May of this year by a piece of shit named Demetrius Blackwell. It seems clear this shooting was part of the anti-cop culture #BlackLivesMatter has created. That’s three officers down. Last Friday, Sheriff Darren Goforth was gunned down in Texas by shitstain Shannon J. Miles shortly after Texas #BlackLivesMatter activists called for the murder of white cops. Three days after Goforth, also in Texas, Officer Don Allen was found dead in his home. His death was believed to be the result of a plan involving “multiple parties.” As I write this, they are still looking for three suspects in the shooting of Lieutenant Charles Joseph Gliniewicz in Chicago on Tuesday morning. We”re now up to at least six officers” deaths that can be directly tied to #BlackLivesMatter. That’s twice as many real, dead cops as there are wildly inaccurate stories. Is that enough?

If it isn”t, here’s more good news for the #BlackLivesMatter movement. It’s impossible to quantify how many cops have died because of these Black Lies. Cops” murders have definitely spiked in the past two years, and 2015 is far from done. In the last week of August, we lost one cop a day. After a brief look at the cause of death for these seven officers, one is struck by a common theme. None of them were picking fights at night with someone on volunteer watch. They weren”t lunging at anyone’s gun in a suicidal attempt to prove their manliness, and they weren”t screaming “This ends today!” at someone who was just trying to do his job. Officer Harry Nelson was shot with his own gun after trying to stop his cousin from stabbing people. Detention Officer Tronoski Jones had a heart attack after being attacked by an inmate. Sergeant Peggy Vassallo was hit by a car after she pulled over to help someone. They all chose to take jobs in incredibly dangerous lines of work and they did it to help people.

This hate group is touted as a political movement by everyone from mainstream news pundits to the president himself. Their agenda is murdering people who volunteer to help us. Their families get calls from the president and millions of dollars. Out of the hundreds of officers who died in the line of duty in 2014 and 2015, I think there’s been one call from the president so far.

White guilt over black failure has reached a zenith, but even in the most out-there version of the narrative it’s three to six. Can we stop now?