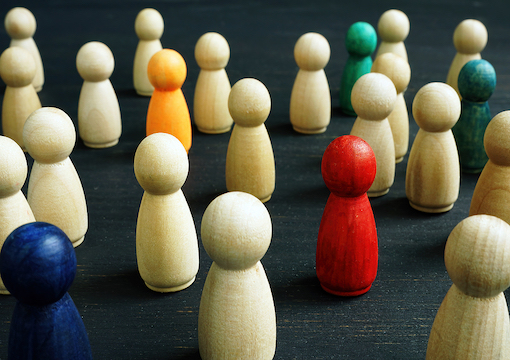 Tuesday isn’t just for tacos anymore. Yesterday was Joe Biden’s Equity Tuesday when he highlighted his administration’s extensive plans for upping racial “equity” by undermining the 14th Amendment’s promise of “equal protection of the laws.”

“Equity” has become the dog-whistle term used to alert the Woke that you intend to deliver to them the equality of outcome they desire rather than the equality of opportunity they deserve. Politicians who laud “equity” are, in effect, inevitably promising racial quotas at the expense of the careers of competent white men and their families.

Granted, America has already been doing exactly that for the 52 years of the Affirmative Action Era. But the Biden administration promises to do it harder, much harder.

For some years now, the buzzword “equity” has been oozing out of the lowbrow fever swamps of the Schools of Education, where it had emerged as the politically correct replacement for the time-honored but therefore now-problematic term “equality.”

“‘Equity’ has become the dog-whistle term used to alert the Woke that you intend to deliver to them the equality of outcome they desire rather than the equality of opportunity they deserve.”

To the Woke, the only acceptable meaning for “equality” is that they should be handed wealth equal to what you and yours have earned.

Also, “equality” sounds rather mathematical, and math is racist. “Equity,” in contrast, is moralistic. The Woke aren’t too good at math, but they are unrivaled at moralizing about why they deserve your money.

So they’ve junked their once sacred virtue of egalite in favor of “equity,” which they’ve predefined as meaning that they are good and must get more cash and that you are bad and must ante up.

Thus, the word equality is falling out of fashion. For example, Harvard economist Raj Chetty has recently changed the name of his formerly au courant Equality of Opportunity Project to Opportunity Insights.

Hence, the rise in popularity of the word “equity,” a confusing but pleasing term that has connotations of fairness, justice, law, investments, and homeownership. “Equity” has traditionally had so many different technical definitions—a branch of law that was once distinct from the common law; the common stock of a corporation; or the value of a property above the amount of its mortgage—that it makes the person using the word sound smart, while disarming the confidence of listeners. (“She must be using ‘equity’ in one of those weird ways that educated people use. I’d better just nod along and not ask any questions so nobody will notice I don’t understand.”)

A cartoon popular with nice white lady schoolteachers illustrates the current distinction between the bad old concept of equality and the good new ideal of equity. It shows three freeloaders undocumented ticket-holders trying to watch a Major League Baseball game by sneaking peeks over the outfield fence by each standing on a box. But, under Equality, the balding father is too moronic to notice that his smallest son still can’t see. 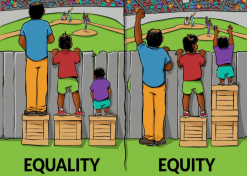 Under Equity, however, the more childlike races are given extra booster boxes to raise them up. This notion of lifting up the racially immature thrills nice white lady schoolteachers no end.

Curiously, if taken literally, the cartoon would seem to imply that the fathers ought to be responsible for forgoing their own convenience to help their deprived sons. But instead, everybody knows that what the cartoon really proves is The White Man Must Pay.

Although “equity” jargon started out in pink-collar seminars, it has spread to the commanding heights of the power structure.

The day before the election, for example, Kamala Harris tweeted herself narrating in her grating voice a humiliatingly awful animation about mountain-climbing equity. After all, everybody knows that the only thing holding back blacks from winning all the mountain-climbing championships (climbers do have championships, right?) is white racism.

Yet, the artists, and perhaps the vice president as well, appear to have never gotten more than ten feet off the ground without the aid of an escalator.

You owe it to yourself to watch this video:

If you want, you can mute the vice president’s thin, braying voice-over and less painfully read her words here:

“So there’s a big difference between equality and equity. Equality suggests, ‘Oh, everyone should get the same amount.’ The problem with that—not everybody’s starting out from the same place. So, if we’re all getting the same amount but you started out back there and I started out over here…you’re still going to be that far back behind me…. It’s about giving everyone the resources and the support they need, so that everyone can be on equal footing and then compete on equal footing.”

But do watch the video: It’s wonderfully lame.

Kamala’s cartoon depicts a black mountain climber as being too stupid to follow the trail to the cliff chosen by his smarter white partner. Thus, the discriminated-against black man can’t reach the magic rope that somehow pulls the privileged white mountaineer up as if he’s riding a ski-resort towrope. (In reality, climbers use ropes for safety, not to be effortlessly winched up the incline by an invisible mechanism.) The racist rope makes the black guy sad, so he sulks.

But then, apparently, a vast Biden-Harris Administration equity initiative elevates the entire crust of the earth. Now the black climber is finally at the starting place he should have been at if only he’d imitated the white guy. In the happy ending, the black climber joins his white friend on the summit, where, side by side, they stare into the big gay sunset.

Republicans have been trained to denounce this as “Marxism,” but it’s actually Kendiism, the ideology of the enterprising capitalist/antiwhite racist Ibram X. Kendi, who has made a fortune lecturing that any racial inequality in performance is proof of inequity.

But it’s safer for whites to sputter against Marxism than to deny Kendiism. Who dares tell Professor Kendi that the main reason in 2021 that blacks tend to perform poorly on many measures is not white racism?

Therefore, Kamala sums up that “equitable treatment means we all end up at the same place.”

And yet…Kamala and Joe didn’t end up at the same place as everybody else. It’s almost as if “equity” applies to you and yours but not to the Bidens, Harrises, and Kendis.