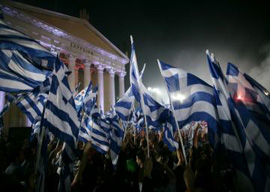 That same quietly genocidal 2000 document targets “right-wing extremist violence” but makes no mention of the idea that “left-wing extremist violence” has ever existed. It claims that “contemporary nationalism” is “based on obsolete and destructive ideas of homogeneity which foster division and racial hostility” and that “Europe must divest itself of the idea of a white core culture and redefine “nation” to mean the community within the jurisdiction of the state….”

In other words, the softly totalitarian EU gets to dictate what “Europe” is rather than, say, indigenous Europeans. And “Europe” is now clearly a decade-old currency called “the euro” rather than the landmass that has hosted indigenous Europeans for tens of thousands of years. And if you dare to question any of this, you obviously suffer from a fresh new mental illness known as Europhobia. Kindly forget that the EU is headquartered in Belgium, a nation rapidly falling apart due to ethnic incompatibility between the Flemish and the Walloons.

None of this is meant to imply that Greece’s Golden Dawn party doesn”t play the role of fascist street goons con mucho gusto. Their well-muscled henchmen are known for physically attacking illegal immigrants, leftists, and the occasional journalist. Their latest TV ads focused on deporting illegal immigrants and urged indigenous Greeks to help them “get rid of the stench.” Their party flag resembles a swastika in the process of unraveling, and they flash one another the Roman salute with an enthusiasm unseen on European soil since the 1940s. Their party charter states that “only Aryans in blood and Greeks in descent can be candidate members,” and their leader Nikolaos Michaloliakos served prison time for possessing explosives.

Yet the ancient Greek nation once suffered under nearly four hundred years of Ottoman occupation and has recently been flooded with predominately Muslim immigrants who, according to various estimates, suddenly comprise anywhere from 10 to 20 percent of the total population.

These days, hyper-centralized agencies such as the EU seem to protect “indigenous rights” for everyone except indigenous Europeans while condemning “colonialism” except when it comes to the demographic colonization of Europe.

Is it possible that the globalist mantra is wrong and that multiculturalism leads to conflict rather than harmony?

Only a detached leftist academic would think that in a time of economic depression, mass immigration of mostly unassimilable and often culturally hostile foreigners would help the working class rather than harm it. Only a deluded leftist ideologue or a media-brainwashed useful idiot would keep scratching their head at the persistently stubborn resurgence of nationalism without pausing to ponder that perhaps tribalism is an ineradicable human instinct rather than a sinister psychological aberration.

In last week’s elections, Golden Dawn performed best in crime-addled areas of central Athens, gaining up to a quarter of the vote in some precincts. What could those voters possibly know that might escape some faraway Brussels Eurocrat in their cramped grey hypoallergenic cubicle?

What about reports that in some areas, Golden Dawn serves as a “Robin Hood” agency that provides clothing and food for vulnerable Greek nationals? Is it true that in certain Athenian quadrants, imperiled Greeks are more likely to call in Golden Dawn for physical protection before they”d ever call the police? Is it possible that some Greeks feel that only Golden Dawn cares about their survival and is willing to shed blood to ensure it?

For some Greeks, it seems to have come down to a choice between Golden Dawn and Goldman Sachs. “Why should they vote for us?” asked party leader Nikolaos Michaloliakos. “Because they have nothing better.”