Every Ape for Himself 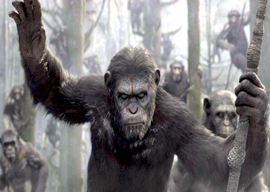 Before Reeves came on board to replace Rise‘s original director, Rupert Wyatt, the sequel wasn”t going to begin until the mutating apes had become fully articulate. But Reeves, who isn”t fully articulate himself, wanted to portray the growing pains of ape talk:

So I was like wait a minute, let’s not skip that. … I was like “There’s gotta be some way to use all these things and allow us not to miss the full coming into articulate expression.” And I wanna see the beginning of language.

The problem with this premise, however, is that an entire movie in which the monkeys enunciate slowly and effortfully, like Indian chiefs in old Westerns (“Apes together strong!”), dissipates the central black-white racial dynamic of the series.

It also reminds us of why there have been so few cowboy and Indian movies over the last 40 years. There had been plenty of movies about Indians before 1968, but the original Planet of the Apes enthralled audiences because it dealt metaphorically with a more relevant topic: black power.

Why did white audiences come to prefer movies about blacks to movies about Indians? Perhaps because blacks are more entertaining. As Charles Darwin noted in The Descent of Man:

… the various races, when carefully compared and measured, differ much from each other … Everyone who has had the opportunity of comparison must have been struck by the contrast between the taciturn, even morose aborigines of South America and the light-hearted, talkative negroes.

It’s not just me who sees the Planet franchise as traditionally being an allegory about blacks and whites. Sammy Davis Jr. considered the original Planet of the Apes the best film ever about black-white relations, and is said to have enshrined the eight-foot-tall prop statue of the primordial primate Lawgiver in his Beverly Hills backyard. (After Sammy died $5 million in debt to the IRS, the feds foreclosed upon the fiberglass figurine and auctioned it off for $2,500.)

In the first Planet of the Apes, Charlton Heston, the ultimate white man, is thrown into a world where monkeys are the Man and he is reduced to the status of an angry black radical. In Rod Serling’s screenplay, gorillas are the Irish cops, orangutans the conservative WASP ruling class, and chimpanzees the liberal Jewish intellectuals who are Heston’s only hope.

In Serling’s vision, these ethnic rivalries could undermine the ruling caste.

But Dawn is a product of contemporary America, in which the natural resentments among the races of the Obama Coalition must be covered up with animus directed at the white man. Hence it never occurs to the feckless humans of Dawn to try to exploit speciesist divisions among the apes.