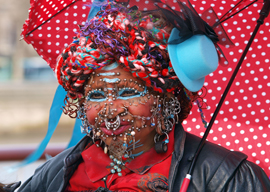 A young man of my acquaintance recently ended his intimate relationship with a girl that had lasted some years, and announced the fact to the world on Facebook, together with some rather disobliging commentary on his former lover’s character. This mania for making public what ought to remain private is, if not entirely new (for, as the Bible tells us, there is no new thing under the sun), at least of such greatly increased intensity that it might as well be regarded as new. The possibility of publicity brings forth the desire for publicity.

Most men, observed Thoreau, live lives of quiet desperation; or perhaps one should say, once lived lives of quiet desperation. What has changed is not the desperation, but the quietness with which men now live it. The ability to give public voice to dissatisfaction in all its myriad manifestations has increased out of all proportion to the reasons for it, thus giving the impression that we live in the worst of times. But even the idea that we live in the worst of times has its consolations, for man is a natural seeker after superlatives and does not want to experience the merely average.

“It is as if our lives are real only insofar as other people know about them, as many as possible.”

I suppose that the mania for giving publicity to one’s own life arises from the feeling that what is only private cannot be of any importance, a feeling that is promoted by the publicity given to the supposedly intimate details of the lives of celebrities. I remember that buses in Nigeria used to have little mottos painted on them that gave advice to the public, for example Let them say“in other words, take no notice of the malice of evil-sayers. Another such motto asked Why die in silence? I haven”t been to Nigeria recently, but a motto more in keeping with contemporary mores would be Why live in silence? It is as if our lives are real only insofar as other people know about them, as many as possible.

But, of course, in reality we don”t want everything to be known about us: We want only those things about us to be known that we want to be known about us. We want our cake and to eat it, or as the French put it, the butter and the money for the butter. This desire is impossible to fulfill, but it is profoundly human. Which is one of the reasons, among no doubt many others, that human life will never be perfect or entirely satisfactory. We want six impossible things before breakfast.

A religious sensibility (which is now utterly alien to us, thanks to the belief that progress is illimitable) would protect us from the harmful illusion that anything less than having all our desires satisfied simultaneously is anomalous or unjust. And our demand that incompatible desires be met at the same time imposes strange obligations on others.

I first thought about this during the early years of the AIDS epidemic, when it was demanded of us that we should believe incompatible things simultaneously, for example that it was simply a disease like any other and that it was a disease of unprecedented importance and unique significance; that it could strike anybody but that certain group were martyrs to it; that it must be normalized and yet treated differently. For example, tests for it alone of all the thousands of ills that flesh was heir to had, by legal prescription, to be preceded by pre-test counseling. It was a bit like living under a small version of a communist dictatorship, in which the law of noncontradiction had been abrogated in favor of dialectics, under which all contradictions were compatible, but which contradictions had to be accepted was a matter of the official policy of the moment.