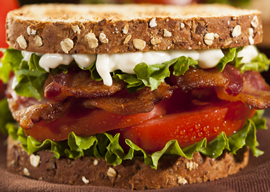 The last time I checked in with the perpetually outraged, they were angry because we were lighting off fireworks. Apparently, July 4th celebrations glorify war, or something. Around the same time, we had Anthony Cumia lose his job for “abhorrent” Tweets he sent out after being attacked. Five seconds ago, I checked in on them and it turns out Elisabeth Hasselbeck’s remarks about Rosie O”Donnell are “hate-filled.” Hasselbeck implied Rosie’s antimilitary comments are antimilitary and added that Rosie will retake control of The View.

I knew I”d find something offensive in the news quickly. Offended people are almost as common as apologies. In fact, it’s become a challenge to find something that isn”t offensive. I”m looking down at my feet right now and wondering if they”re offensive. My sneakers are white and they”re called Chuck Taylors. I don”t see anything controversial about the basketball player the shoes are named after, but Dave Chappelle did use the name to describe his parody of a clueless white anchorman. Phew. Shoes are not offensive. Not so fast!

“I don”t like helmet laws, but having a bad hairdo is being oppressed now? We didn”t learn that in school.”

When Nicolas Sarkozy banned the burqa, the feminist reaction was “How dare he?” To the left, multiculturalism trumps all other -isms, so if nonwhites insist that women walk around in black polyester bags all summer, all the girl power to them.

A not uncommon reaction when something like this happens is to say, “Well, we”re just as bad.” In this case it was the Daily Show drawing parallels between Muslim garb and high-heeled shoes. They”re just as sexist, all right? The fact that women wear them on girls” night out, when they rent a karaoke room with the gals and no boys are allowed, is irrelevant. So is the part where we don”t cane or beat women who refuse to wear them. We just sigh. Chuck Taylors may not be racist but high heels are definitely sexist.

Looking down isn”t inoffensive. What about what’s right in front of me? I”m eating a BLT. Is the bacon offensive to Muslims? There are none near (thank God) so I think I”m OK. Food, however, is not. When it comes to political correctness violations, food is off the chain. Simply saying “fried chicken and watermelon” around a certain population in the United States is racist. When my band opened for Ice-T’s all-black group Body Count, they ordered copious amounts of KFC and I did my best not to notice.

Chick-fil-A is so homophobic that simply going there is a fierce slap in the face to gays. If you”ve done this and you feel bad about it, go to Burger King and cleanse your political palate with a gay Whopper.

I can”t think of a sexist food offhand, but I know sugary drinks, fast food, and salt are verboten to the left. Up until about a month ago, it wasn”t just offensive to have a giant sugary drink in New York, it was illegal.

My coworkers are watching the World Cup in the office. That’s safe, right? Not really. Sporting seems like such a perfect formula for meritocracy, so why mess with it? If we represented every gender, culture, and race on a basketball court, it would look like the Keystone Kops raiding a rave. The tall black guys would be the only ones scoring points as short, fat, bald, gay whites ran behind them coughing and wheezing.

That doesn”t mean we can”t open a jar of PC fart air into a ball court and ruin the game. Most recently team owner Donald Sterling offended people by telling his racist girlfriend she could continue to sleep with black guys as long as she didn”t rub it in his face, but that’s nothing. College kid politics are all over sports. You”re a racist if you use the ancient term “Chink in the armor” and you”re homophobic if you thought Michael Sam kissing his boyfriend was gratuitous. It’s sexist that there aren”t more women’s sports, and even affirmative action is rearing its ugly head.

In South Africa, affirmative action has leaked into rugby, so it’s possible my absurd basketball scenario above is slowly becoming less unthinkable.

The ship of “sports teams” logos” sailed a long time ago. Chief Wahoo may be quietly phased out of the Cleveland Indians despite the fact that he is a fucking cartoon. Yes, his features are exaggerated. That’s what a cartoon is. Whether it’s the term “Redskins” or the cartoon logos that surround it, anything depicting Indians is offensive (mostly to rich whites). The Redskins are struggling to maintain their name because someone argued that a team could conceivably name themselves something negative. Is there a team called the Losers? It’s not like New York street gangs in the 1950s, when you”d have ironically intimidating gangs like the Cry Babies and the Momma’s Boys. These logos are meant to represent winners. The cartoons are meant to be inspiring, not demeaning. The Atlanta Braves face is laughing. Ever heard of enjoying life?

I always assumed comedy would remain safe. If you”re not funny, nobody wants to watch you on stage. If you”re funny, you could be a Satanist in a Hitler costume. If you listen to Raw Dog Comedy on Sirius radio it’s one of the last bastions of authentic multiculturalism. Being naturally funny is so incredibly rare, they can”t afford to pick and choose. You”ll have Godfrey talking about his clueless African dad right after hearing Bill Burr say motherhood is the easiest job in the world. Amy Schumer talks about having sex with teens and then Todd Glass describes being gay. If you”re funny, you”re funny, and everything else is secondary.

Sarah Silverman put up a good fight when PC started creeping in. When an activist accused her of racism for saying “Chink,” I remember her riffing on him going pee-pee in her Coke. When pressed for an apology she said the most disturbing thing about it was that Jews no longer control the media. That was well over 10 years ago. Today we have Joan Rivers being interrogated about her jokes on CNN until she has to walk off set. Stand-up comedians today get fined $15,000 for insulting hecklers. You can”t touch certain subjects and apologies have to follow everything that’s “too soon.” I still go to shows regularly and I”ve noticed the room often goes dead when race comes up. I”ve heard Dave Attell say stand-up is over and I”m inclined to agree.