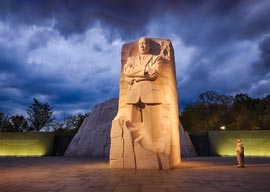 A few Hollywood figures have fully embraced the political logic of their craft”most notoriously John Milius, an outspoken right-wing gun enthusiast. And yet, much as Milius’s politics outraged movie industry mediocrities, he was a close friend of many of the top talents, including Spielberg, Lucas, Coppola, Zemeckis, and the Coen Brothers (John Goodman’s character in The Big Lebowski is based on Milius).

And modern American spectator sports, such as the Super Bowl, are unabashed exercises in gigantism and hero worship, of the sort seldom seen since the chariot races of Justinian the Great.

But so was that essence of 1960s culture, rock music.

Before the development of electric amplification”which progressively improved in quantity and quality from the Hawaiian music craze of the 1930s to its near perfection in the 1970s”the task of making music thunderously loud enough to overpower listeners viscerally required many musicians playing in a disciplined fashion.

For example, Hector Berlioz’s Symphonie fantastique debuted in 1830 with an orchestra of 90 in the Paris Conservatoire, which could seat 1055: a ratio of only a dozen audience members per musician.

Brass instruments are louder than strings. Benny Goodman’s famous 1938 rendition of “Sing Sing Sing“ at Carnegie Hall employed 14 musicians for a crowd of close to 2,800: a ratio of roughly 200 listeners per musician.

In the postwar era, however, a tiny number of musicians playing electric guitars could be louder than an entire orchestra or big band, letting the spotlight concentrate more fiercely. At Woodstock in 1969, the ratio would be 100,000 fans for each of the four musicians in the Who.

The logic of amplification is most apparent in the career of Bob Dylan, who grew up wanting to be a leather-jacketed rock “n” roll star. But by the time he got to Greenwich Village, rock was floundering. So he hopped on the folk music fad of the early 1960s, with its acoustic guitars and everybody singing about union solidarity. Dylan immediately took over folk music, and then set about draining the communal, socialist politics out of folk songs, using them instead as stages to display his own idiosyncratic verbal genius.

After the Beatles proved the kids wanted to hear electric guitars, Dylan turned his back on music that could be played around a campfire. By the second half of 1965, he”d turned himself into the rock star of his youthful dreams.

Everybody knows that the Woodstock rock festival was all about peace and love and equality. Yet, 46 years on, with the immediate controversies of 1969 receding into the long perspective of history, when I watch movies of the 70-foot towers of speakers blasting out power chords by helicoptered-in American and British rockers, I notice there aren”t too many Germans, Japanese, Italians, or Frenchmen up on stage making a colossal racket.

Instead, the stars are the sons of the guys who won World War II. As we head toward the middle of the 21st century, Woodstock is beginning to look like a belated victory celebration by the English-speaking nations that ruled the world.