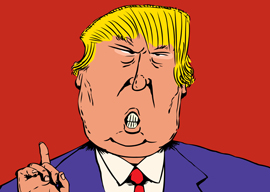 The king doesn”t trust anyone who’s not either family or hired help, so he’s not fully aware that, because of his inattention, many of the institutions in his domain are crumbling, and there’s a giant crack in the castle wall that grows more ominous by the minute. None of this matters much to him because he’s so relentlessly focused on the present moment and his immediate environment. (“This is not the living room,” the first queen says to the maid. “It’s the throne room. How often do I have to tell you?”)

The devoted second queen, the hottie, doesn”t want to tell the king that he has to die, but the first queen insists. “I agree it’s not so amusing as all your charity balls,” she tells her. “Those dances you get up for children, and old folks, and newlyweds. For victims of disaster or the honors lists. For lady novelists. Or charity balls for the organizers of charity balls. This one’s just for the family, with no dancers and no dance.”

In other words, this time you can”t fly to Palm Beach.

Once the king enters, he fills up the room…with his weakness. (Brent Harris, who performed the role last summer at the Shakespeare Theatre of New Jersey, was especially impressive in his self-involved grandiloquence.) The king commands, but he also prattles”about his slippers, his sleeping habits, the earth quaking, the noise, his ribs, his headache, his hunger, his pills, his liver, his tongue”and yet he hates it when it’s implied that something might be wrong with him. “Why are you all staring at me like this?” he demands. “Is there something abnormal about me? Now it’s so normal to be abnormal, there’s no such thing as abnormality. So that’s straightened out.”

He declares things finished and solved.

All the people in the throne room, except for the devoted first wife, encourage him to abdicate because he’s proved that he can”t really accomplish anything in his weakened state. The result: He orders them all arrested and/or beheaded, then can”t figure out how to get the order executed.

He keeps falling over, then denying that he fell over.

He keeps reliving victories in his past.

He orders bugles to sound. He orders a 121-gun salute in his own honor. Nothing works so he asks for a do-over.

“I”m like a schoolboy who hasn”t done his homework and sits for an exam without swatting up the papers,” mourns the king. “Like an actor on the first night who doesn”t know his lines and who dries, dries, dries. Like an orator pushed on a platform who’s forgotten his speech and has no idea who he’s meant to be addressing. I don”t know this audience, and I don”t want to. I”ve nothing to say to them. What a state I”m in!… I”d like to re-sit the exam.”

At one point he starts shouting out the windows of the castle so that “the people” will realize he’s dying and come to his aid. He implores his doctor to tell him it’s not true.

For a while he’s consoled by the fact that everyone for the rest of recorded time will remember him”or will they?

“Please make them remember me! Make them weep and despair and perpetuate my memory in all their history books. Make everyone learn my life by heart. Make them all live it again. Let the schoolchildren and the scholars study nothing else but me, my kingdom and my exploits. Let them burn all the other books, destroy all the statues and set mine up in all the public squares. My portrait in every Ministry, my photograph in every office of every Town Hall, including Rates and Taxes, and in all the hospitals. Let every car and pushcart, flying ship and steamplane be named after me. Make them forget all other captains and kings, poets, tenors and philosophers, and fill every conscious mind with memories of me…. Let my likeness be on all the icons, me on the millions of crosses in all our churches. Make them say Mass for me and let me be the Host. Let all the windows light up in the shape and color of my eyes. And the rivers trace my profile on the plains! Let them cry my name throughout eternity, and beg me and implore me…. Let them preserve my body in some palace, on a throne, and let them bring me food. Let musicians play for me and virgins grovel at my ice-cold feet.”

The sardonic response of Marguerite, the first queen: “He never did understand himself.”

He commands the sun to help him, as he’s heard that kings can do that. He becomes frightened and begs for some comfort, and everyone tells him all the wonderful things he’s done for the country.

They tell him all the advancements in civilization that will go on after his death because the youth of the nation will carry them out.

They tell him he made the world a wonderful place.

His young wife, trying to save him with her love, says, “You are inscribed forever in the annals of the universe.”

The confused Guard, attempting to announce the king’s decree, shouts, “His Majesty the King wants the remains to remain!” (Obamacare, anyone?)

Finally the Guard, determined to comfort the king by recording his legacy, reels off his accomplishments.

“It was His Majesty, my Commander in Chief, who set the Thames on fire. It was he who invented gunpowder and stole fire from the gods. He nearly blew the whole place up. But he caught the pieces and tied them together again with string. I helped him, but it wasn”t so easy. He wasn”t so easy either. He was the one who fitted up the first forges on earth. He discovered the way to make steel. He used to work eighteen hours a day. And he made us work even harder. He was our chief engineer. As an engineer he made the first balloon, and then the zeppelin. And finally, with his own hands, he built the first airplane. At the start it wasn”t a success. The first test pilots, Icarus and the rest, all fell into the sea. Till eventually he piloted the plane himself. I was his mechanic. Long before that, when he was only a little prince, he”d invented the wheelbarrow. I used to play with him. Then rails and railways and automobiles. He drew up the plans for the Eiffel Tower, not to mention his designs for the sickle and the plough, the harvesters and the tractors…. He extinguished volcanoes and caused new ones to erupt. He built Rome, New York, Moscow and Geneva. He founded Paris. He created revolutions, counter-revolutions, religion, reform and counter-reform…. He wrote tragedies and comedies, under the name of Shakespeare…. He invented the telephone and the telegraph, and fixed them up himself. He did everything with his own hands…. Not so long ago he managed to split the atom….”

Steve. Reince. Jared. Ivanka. Rex. Mad Dog. Study this speech. If anything will work, as far as getting the agenda moving forward, it has to be prefaced by precisely this sort of screed. And show him a Potemkin-village photograph of the inauguration crowd”10 million people proclaiming him emperor forever. And give him a crown and a scepter.

In Ionesco’s play, alas, the alternative facts have no effect. The king starts to forget the names of everyone, even his wives, and then their faces. The only thing he can summon up affection for is a cat that “loved me.”

Says the doctor, “He will be a page in a book of ten thousand pages in one of a million libraries which has a million books.”

His first wife, the last character to vanish from the stage, says, “He thinks his existence is all existence.”

And then the walls of the castle fall away and he dissolves into mist.

Donald Trump is not Hitlerian, or dystopian, or Orwellian. The Donald Trump presidency is Theater of the Absurd.