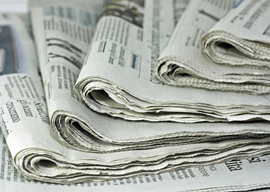 They don”t just want us to hate blacks. They want us to hate Muslims too. I”ve already discussed the times NBC and ABC hired actors in a failed attempt to find anti-Muslim prejudice, but most recently the Washington Post said “things got ugly” when a woman in Muslim garb asked why the panel sees all Muslims as the problem. Again, you can just tell the story is bullshit. You”re saying to me that the Heritage Foundation was hooting and hollering after a tiny Muslim women dared to make a totally naÃ¯ve allegation? Yeah, right. The only place that kind of irrational behavior happens is on college campuses. Of course, after the full video was released we saw what really happened: absolutely nothing.

It’s not just racists the media are desperate for. They want evil rich people too. When Tom Shillue dared to say gentrification can be good for a neighborhood, the headline became, “Fox News host: “Right-wing people” love gentrification because poor people smell bad” (they changed the title when Tom called them out but you can still see it in the URL). I know Tom. He lives in the Bronx and he loves how his neighbors smell. When he read that headline, he thought it was from The Onion.

Richard Grenell felt the same way when he learned he was a “Republican strategist“ hired to make Bergdahl look bad. “I saw one of the soldiers on Twitter saying he wanted to talk but he was concerned with the backlash,” Grenell told me in a brief public conversation. “We spoke through direct message and I offered my firm’s assistance pro bono. There was no “strategy.””

Evil poor people are also crucial fodder for the lazy narrative machine if they”re white. Rednecks draw almost as much ire as fake Tom Shillue aristocrats. When the patriarch of Duck Dynasty said homosexuality is a sin, the media almost shut the show down. Anyone who has both a dictionary and a Bible can see he was simply stating a hatefact. The show remained popular, so a smear campaign began calling the Dynasty frauds for having frosted tips and appearing in corny family photos. For the record, few things are more redneck than having a Sears portrait done. The truth is, Phil Robertson grew up dirt poor, eating frogs. He got educated and sent his son to business school, but culturally, this family’s history is white trash. Unfortunately, if you talk to anyone in journalism who doesn”t work at Fox, they will laugh at you for not taking their evidence of a hoax for granted.

Occasionally, the media’s need to vilify tradition can get so extreme, you think you”re watching a horror movie. AP recently had to run a retraction of a story that claimed Catholics were starving orphans to death and stuffing their bodies in septic tanks. The media elite ran with it and the fake mass graves made headlines despite there being no evidence of this whatsoever. The actual number of recorded bodies the nuns put in septic tanks is zero. How about we see that same kind of enthusiasm for Islam’s transgressions? They got dead kids out the wazoo.

The media also love a good pervert. Elmo’s too black and gay, but successful white guys such as Dov Charney and Terry Richardson are perfect. Charney was recently fired from American Apparel because he allegedly used an employee as a sex slave. That’s the end of the story for most papers, but anyone with more than a couple of minutes to spare can dig up the disgusting (NSFW) emails she sent to him after she stopped working there.

Similarly, anyone who defends Terry Richardson is a “rape apologist” after a woman claimed she regretted having consensual sex with him once and came to this conclusion years later. The media ran with it, but when a recent cover story in New York Magazine noticed her with several different hairdos over years of sexual photos she replied, “Jesus Christ, I have no explanation for that.” She contacted the writer and explained, “I”d be scared this undermines my credibility but if anything I think it shows I was/am more traumatized by the experience than I thought.” This was the only remotely fair article written about Richardson and one of the few that caught some of the glaring examples of fraud that surround the story. What shocks me most about his case is the lack of backlash from women who really did suffer sexual assault. Fake stories like this trivialize their trauma. Aren”t they mad at these phonies?

Once again, the crusaders for justice are damning the same souls they”re pretending to save. I”m reminded of the book Please Stop Helping Us: How Liberals Make It Harder for Blacks to Succeed, which just came out. When you make up stories for the greater good, you hurt everyone. Now, when a real hate crime happens or someone really does rape an employee or a black person is genuinely blocked from a job or we hear of mass graves in sewers, 78% of the public is going to think “Yeah, right.” That’s what a quarter century of crying wolf will do. Way to go, freedom writers.