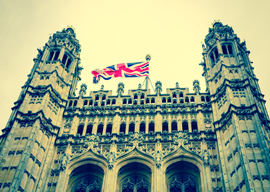 As far as I can tell, however, according to one reference in The Telegraph, Brown “could serve in both Parliaments.” That sounds bizarre and may be wrong, but the entire topic doesn”t seem to have come up much in the London press, presumably because it would be in poor taste to discuss depriving Scottish politicians of their seats just because Scotland becomes a foreign country.

While secession is unthinkable in American politics, its thinkability in Britain raises interesting questions about other regions within Europe. For example, after I wrote a 2007 column defending French nationalism against the ambitions of the European Union, a Celtic-speaking Breton nationalist wrote me, not unreasonably:

In my case, Brittany is the optimal size to allow people to realize themselves and feel they have a meaningful existence. Brittany is about the same size as Denmark. But we would still need cooperation with other European states, and I think the EU would be a good way to do that. What prevents us to do that is France, a noxious organization that has been destroying us for several centuries. By the way, we are an older nation than the French, and our ethnic cohesion is still much higher than anything you could find in France. But still, our final dissolution will probably occur in the next few years, by means of French and third-world mass immigration, organized by the French.

Since then, the failure of the Euro currency has damaged the realistic prospects for would-be breakaway republics like Brittany or Scotland. Indeed, the SNP claims Scotland will retain the British pound, although how withdrawing from political influence in formulating British monetary policy will aid Scottish autonomy is a conundrum.

Still, it’s worth noting that both France and Britain are authoritative states that evolved to do battle effectively with each other through extreme centralization of power in their capitals.

By American standards, they are strikingly lacking in checks and balances. For example, it’s absurd that Prime Minister Cameron could unilaterally grant Scotland a secession referendum predicated on a simple majority of Scottish votes and without the voters of the rest of the United Kingdom having any say. (In contrast, a majority in the San Fernando Valley voted to secede from Los Angeles in 2002, but the remainder of the city voted to keep their tax cow, so secession was blocked.) But Britain has no written constitution, so Prime Ministers, even of a minority government like Cameron’s, have arbitrary powers resembling those of the captain of a pirate ship.

The leaders of Her Majesty’s Government have rights over local authorities that Presidents would envy. For example, Blair redrew ancient county lines willy-nilly, and Mrs. Thatcher, displeased by the politics of the Mayor of London, simply abolished his job. This British insensitivity to local prerogatives is one reason why Americans like Jefferson rebelled in 1776.

The Scottish independence movement inevitably inspires the question of secession in America. As John Derbyshire has pointed out, the United States represents a vast expanse of territory, and people from distant regions increasingly get on each other’s nerves. In an era of free trade zones and military alliances, wouldn”t it be simplest for the U.S. to break up like the SNP wants the U.K. to end?

I don”t think so, however. The big difference is that that the U.K. is primarily a north-south country, while the U.S. is an east-west country. Latitude divides people more than longitude. In America, the most important political divide is distance from deep water, such as oceans or the Great Lakes: what I call the Dirt Gap. San Francisco and Manhattan, for example, are 2900 miles apart, but are similarly liberal because family formation is equally unaffordable due to both being similarly constrained from expansion by water. Hence, the “family values” party is less relevant where family formation is prohibitively expensive.

That means, however, that the U.S. would be harder than Britain to split ideologically along geographic lines. The lines between Red and Blue America tend to run indistinctly through the exurban fringes of coastal metropolises.

That makes secession less practical in America than in Britain.