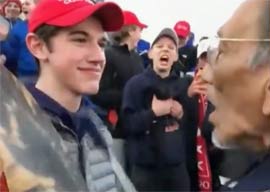 “Innocent until proven guilty” is supposedly our legal standard regarding criminal proceedings, and I believe it’s an admirable one even if I suspect it’s rarely utilized. The authorities have too much invested in always being right, and I also believe that most people not only presume the accused is guilty, they relish the armchair sadism attendant to punishing someone else in order to expiate their own guilt and self-loathing.

The past few years have proven beyond a whisper of doubt to me that truth is not the mainstream media’s first priority—leftist ideology is. Therefore, every time they attempt to whip up hysterical hatred toward the nation’s founding stock, I believe the proper standard should be, “False until proven true.”

Witness the bloodlust exhibited by the Supposedly Tolerant in response to a viral video depicting a white Catholic teen in a MAGA hat smirking while a gaunt, tooth-deficient Injun bangs a drum only inches from his face. I was alerted to the video’s existence by my podcast cohost JB Beverley, who says he knew the drum-banging Injun, Nathan Phillips, years ago when they both lived in Washington, DC. He says that despite the media hype about Phillips being a respected tribal elder and Native American activist, he only knew him as a fucked-up grifter who lived in a car.

When I finally watched the video, only to see a white kid in a MAGA hat smirking as Phillips menacingly beat a drum in his face, my reaction was, “That’s it? He stood there smiling while someone attempted to intimidate him, and the media and the Twitter social-justice PMS crowd are dredging up slavery and lynching and the Holocaust?”

Of course. The supply of white hatred is dangerously low these days, so rather than admit they’ve been hyperbolically wrong, the anti-white squads will simply make things up to support their outdated and childish narrative.

To hear the mainstream media tell the story, this frail and elderly tribal elder was surrounded by a group of entitled white racists who had harassed a group of black “black activists” before aiming the flamethrower of their undying hatred toward Phillips, a Vietnam veteran whom they surrounded, taunted, and blocked from leaving as he attempted to flee their lynch mob. They shouted “BUILD THAT WALL!” at him along with other xenophobic remarks.

“The past few years have proven beyond a whisper of doubt to me that truth is not the mainstream media’s first priority—leftist ideology is.”

In truth, remarks were made that could be classified as “xenophobic,” or at least “nativist.” But subsequent video footage reveals that it was a member of Phillips’s posse telling the kids, “You white people go back to Europe, this is not your land.”

There were also remarks made that would fit the standard definition of “racist,” but none of them came from the white kids. Video footage shows that for over an hour, a sect of the Black Hebrew Israelites had been taunting the kids by calling them “crackers” and “faggots” and “future school shooters.”

Then again, it took a day or two for the truth to emerge, which was long after the mainstream media had set the wolves loose on the white teenage boys of Covington Catholic High School in Park Hills, Kentucky.

CNN’s Bakari Sellers tweeted that the white kids should be “punched in the face.”

TV host Reza Aslan asked, “Have you ever seen a more punchable face than this kid’s?”

Some fat hairy moron named Jeff Grubb tweeted that although giving a “shit-eating grin” to someone “isn’t legally violence,” it “is fascism. And you should punch fascists.”

Hollywood film producer Jack Morrissey (Beauty and the Beast) tweeted an image of a human body being fed into a woodchipper and blood spraying out the other end along with the caption “MAGA kids go screaming, hats first, into the woodchipper.”

Within hours, though, it became inarguably clear that the MAGA kids were not the antagonists. The original perps were the Black Hebrew Israelites—suspiciously shortened to “Hebrew Israelites” through much of the mainstream press—who were captured on video making the following charming statements toward the Covington boys:

America ain’t never been great. It only been great for you damn peckerwoods.

A bunch of future school shooters.

The biggest terrorist on the face of the earth is the pale face man, woman and child.

CNN had the gall to call these overweight psychopaths in wizard costumes “Four African-American young men preaching about the Bible.” The New York Times did a puff piece on the group describing them as “sidewalk ministers” and quote a black professor who deems them “harmless” compared to white teens wearing MAGA hats. Mind you, even the frickin’ Southern Poverty Law Center classifies the Black Israelites as a “hate group,” probably because they mock the Holocaust and claim to be the True Jews.

Phillips has repeatedly claimed he’s a Vietnam veteran. In truth, he served in the Marines from 1972-1976, never set foot in Vietnam, and went AWOL at least three times.

Phillips claims the MAGA kids “were in the process of attacking these four black individuals” and “looked like they were going to lynch them,” when video footage shows that the opposite was true. Before Phillips decided to get involved, the only antagonists were the Black Israelites.

He insists the MAGA kids chanted “BUILD THE WALL” in his face, although none of the countless videos made of the incident shows this to be true.

He says he and his retinue were swarmed by the MAGA kids and prevented him from leaving, whereas video footage shows that he was the one who approached the kids and started banging a drum in Nick Sandmann’s smirking face. He claims that banging a drum in a kid’s face was an attempt to defuse the situation rather than to escalate it.

Phillips not only has an extensive criminal history, he also has a history of accusing white people of racially taunting him. And mere hours after the now-infamous event in front of the Lincoln Memorial, he and his cohorts attempted to disrupt a Catholic mass at the National Shrine Basilica, screaming for apologies and reparations.

Nick Sandmann—the white boy whose smirk was seen ’round the world—did an interview with NBC where he claims that Phillips was the one who “locked eyes” with him first and that the only reason he smiled was not to mock, but to demonstrate that he had no desire to escalate the situation into violence:

I was not intentionally making faces at the protestor. I did smile at one point because I wanted him to know that I was not going to become angry, intimidated or be provoked into a larger confrontation.

Naturally, the usual suspects ignored Sandmann’s explanation and instead attacked NBC for daring to provide a platform for an obvious enabler of white supremacy and genocide.

To their credit, a few media luminaries admitted they were wrong in their rush to judgment. For the most part, the other torch-bearers either deleted their erroneous tweets or said that although this incident may not have been the right hill to die on, it’s still undeniable that Trump enables unprecedented racist hatred against nonwhites, and that’s their story and their sticking to it, despite the gaping lack of evidence to support it.

Sandmann and others are apparently lawyering up and are ready to launch defamation suits. Although I’m not generally a fan of civil law, I’m increasingly of the opinion that this is the only way to tame these psychopathic online lynch mobs—sue them until they can’t even afford computers anymore.