Feeding Shirts to the Homeless 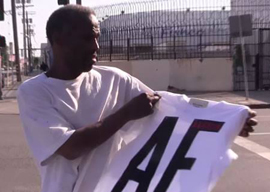 Unlike fellow mogul Russell Simmons, Jeffries doesn’t try to pawn himself off as an enlightened, ascetic yogi while sharing a palatial home with his “personal escort,” a German model.

Yet Karber seems angry that Jeffries isn’t playing the “good corporate citizen” mendacity game. That’s a pretty shaky foundation for an over-the-barricades cause.

Weirder still is Karber’s “solution” to this “problem.”

When it comes to the “homeless,” I’m probably the least sympathetic person imaginable. I know from direct personal experience that large numbers of the “homeless” are “homeless” because a) they were abusive dirt bags whose families finally got sick of their crap; b) they’re crazies who won’t take the pills that were developed at great expense to help them, and which likely cost them nothing out of pocket; and/or c) they concluded that mundane human responsibilities were interfering with their drinking and drugging.

But even given my profound personal antipathy, even I was watching Karber’s video of himself shoving A&F tops and pants at bewildered street people. I found myself thinking: “Wait: Aren’t you demonizing and exploiting hapless winos and loonies by sticking them in your video and giving them clothing you just described as made for ‘douchebags’?”

Confronted by such criticisms, Karber’s now mumbling that standard-issue, dog-ate-my-homework leftist alibi, the one about “raising awareness,” in this case “of the problem of homelessness.”

Guess what? I’m “aware” of the homeless every time I venture downtown.

And by the way: How come I can still see them? Ever since the “homeless” were invented by a terminally damaged, megalomaniac narcissist in the 1980s, we’ve plowed hundreds of millions of dollars into “helping” them, and yet there they still are, stinking up the joint (possibly because the “homelessness-poverty complex” is a thriving industry that keeps other lunatics off the street).

They sure as hell may not be black or poor or even particularly entertaining, but these smug, self-promoting do-gooders almost inevitably turn out to be just as flawed (and even dangerous) as the Charles Ramseys and “Kais” we also seem compelled to hold up as “heroes” (if just for one day.)