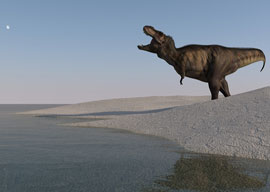 Oh, and in the 1981 Eurotrash flick Possession, Isabelle Adjani is “secretly fucking a tentacled monster in a dirty old apartment in Berlin.”

Frankly, I’d be thrilled if dino-porn finally rendered extinct all that “sexy vampire” crud that’s been clogging the pop-cultural arteries since the 1980s. (Damn you to hell, Anne Rice.)

How many of the genre’s serious fans are adolescent “young earth” creationists who suddenly find themselves too old for The Flintstones? Think about it: They can rationalize their forbidden “dirty” reading on the grounds that these are the only books on the market that depict humans and dinosaurs living side by side, not to mention in other positions.

As for me, the fragments of “monster sex” erotica I read left me cold. If I wanted to daydream about boinking a creature with teeny-weeny T-Rex arms, I’d just muse about picking up (as it were) a midget. If I found myself in the mood to bone a fossil, I’d be more inclined to fantasize about some dead movie star than a triceratops.

It’s always tempting to construct a fearsome “moral panic” colossus out of bits and pieces of pop-culture detritus like this and dub the thing Itscometothisasaurus. And in many cases, we’re right to be alarmed.