For the Love of Hate 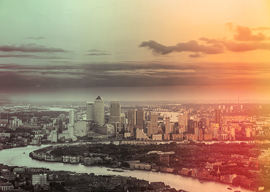 Last week I stayed in a part of London on the border between a rich and a poor part of the city: on one side houses costing millions, on the other side social housing for the city’s hewers of wood and drawers of water, or at least drawers of social security. There was a certain exhilaration in the contrast, at least for an observer. Whether the inhabitants of either side of the divide feel the same exhilaration is another question.

Our hotel faced the poor quarter. Two huge liquid crystal screens, one of them relaying a trailer for the latest violent film, ensured that no one had to rely on the resources of his own mind for stimulation. The paving stones were mottled with trodden-in chewing gum as if there had been a sudden flurry of large snowflakes that had settled on the ground. A Filipina evangelist appealing for passersby to give up sin competed with a guitar-strumming beggar, probably a drug addict, for the attention of the hurrying but worn-out pedestrians. Workers for UNICEF, the perpetrator of one of the greatest mass poisonings in human history (arsenic in the water from ground wells in Bangladesh), with beatific smiles on their faces, rattled their tins to raise funds for the annual leave, dependency allowances, medical and dental insurances, pensions, rental subsidies, education grants, home leaves, life insurances, paid sick leaves, family leaves, family visits, maternity, paternity, and adoption leaves, and special leaves for UNICEF workers worldwide.

“The mind seeks easy targets as a carrier pigeon homes to its destination.”

At night, the sound of people enjoying themselves, which in England is indistinguishable from the sound of someone being kicked to death (the two, indeed, are often the same), filtered into our bedroom. From time to time, including at four o’clock in the morning, police cars with a variety of ear-splitting sirens, from screech to bellow, passed by, giving notice from afar to malefactors of their approach, thereby also giving them time to escape. Thus trouble is averted, though sleep is interrupted.

Needless to say, the architecture was as appalling as that in the rich area was graceful, appalling as only British, French, and Soviet modernism (which are of the same inspiration, or rather lack of inspiration) can be. The number of fast-food outlets, relaying fat, sugar, and salt to the masses, was astonishing. On the border between the two areas was a vast shopping mall in which both the hamburger- and organic, gluten-free-bread-eating classes, worried about the state of their bowels in thirty years’ time, were catered for, though the mall mainly attracted the typical British shopper, that is to say insolvent in pursuit of the unnecessary. Not far away, though, was a market in which the really hard-pressed searched for bargains, from their carrots to their niqabs, the latter no doubt manufactured in China. What, indeed, could better symbolize modern globalization than a cheap niqab made in China and sold in London?

I suppose I should have hated it all, but I didn’t, or at least not with the pure hatred that burns with a gem-like flame, to adapt slightly Walter Pater’s advice to humanity: that “to burn always with this hard gem-like flame, to maintain this ecstasy, is success in life.” Hatred is easier to keep always alive than love, but all the same I have never quite managed it.

It is a strange fact of human psychology that one often has mixed feelings about what—with what one might call the official part of one’s mind—one hates. We are drawn back over and over again to contemplate that which we supposedly detest and wish destroyed. There is more than one reason for this.

In the first place, hatred is an enjoyable emotion. It gives one a sense of moral superiority to whatever is hated as well as a possible source of purpose in existence, if one takes up the cause against it in any practical way. But it is also restful or comforting to the mind, insofar as it obviates the necessity to think any further about other things in all their tiresome complexity. The latter, complexity, is apt to frighten or overwhelm us, to reduce us to a state of paralysis or powerlessness. Monomania empowers.

The mind seeks easy targets as a carrier pigeon homes to its destination. Fortunately for our mental equilibrium, the world presents us with a superfluity of easy targets to choose from. In this sense, political correctness performs a very useful function; for without it, journalists of good sense, such as myself, might have to stretch their minds on such important but dull subjects as what to do in practice about traffic congestion or the under-provision of nursery places. An intellectual might be defined as a person who perpetually seeks easy targets for his critical thought and mourns the passing of a problem.