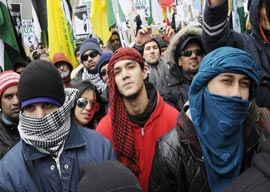 Another famously stupid event of 2015 was the Bruce Jenner media brouhaha. I sort of predicted something like that could be headed our way back in May 2013 when I blogged:

What’s next? After that bravura display of media marketing muscle that was the gay marriage whoop-tee-doo, what’s the encore? There has to be something else to force the rubes to identify themselves by their lack of enthusiasm for the latest cause / crisis. But … what? …

Granted, you may argue that the number of hermaphrodites and transsexuals are too tiny to matter, and that allowing people who are mostly men to beat women (sometimes literally, as in this MMA case) is not in the interest of women. But that’s not the point, the point is that there needs to be a new post-gay marriage cause, and a lot is beginning to be invested in R&D to determine which it will be. This is the second article the NYT has highlighted recently on this esoteric issue, so it definitely has a chance.

I”d say that has turned out to be a pretty good prediction, although whether I committed definitively enough to rack up points would be a matter of opinion.

On the other hand, if I”d known back then that a large majority of the most prominent transgenderites, such as Jenner, Doctor V, and my old MBA school teammate, are obvious men of the right, I likely would have overthought my forecast and backed off, saying that The New York Times would never be so dumb as to celebrate a bunch of aged white Republican egotists who aren”t quite right in the head. But that would have been too smart.

But then Trump himself didn”t foresee how he”d ride the immigration issue to the front-runner spot. The Washington Post reported:

It’s likely that the immigration issue didn”t come together in Trump’s head until he saw Ann Coulter slug it out toe-to-toe with Jorge Ramos of Univision in the spring, and asked Ann for a prerelease copy of her ¡Adios, America! book.

Since then, Trump has been running to a sizable extent on what Peter Brimelow decided to call in the early 2000s the “Sailer Strategy“: Instead of following the conventional wisdom that Republicans must increase immigration to win a higher share of the lackadaisical and naturally Democratic-leaning Hispanic vote, a Republican could try to get more white people to vote for him. I know, it sounds crazy, but they still let white people vote.

I don”t know that this will actually win the GOP nomination for Trump, much less the presidency”I”ve always been less confident about the “Sailer Strategy” than Brimelow has been”but it has obviously worked better than the Establishment strategy pursued so trustingly by Jeb Bush and Marco Rubio.

Jeb’s game plan of running for President of the United States on how he likes Mexicans more than Americans was always absurd, even if Republican donors didn”t notice. But if Rubio had been smart enough in 2013 to reject a partnership with Sen. Chuck Schumer and instead taken the lead in the fight against amnesty for illegal aliens, the Florida senator would likely be the GOP front-runner today.

On the other hand, much as I”d like to take credit for my years of electoral number crunching, what success the “Sailer Strategy” enjoyed during 2015 was almost wholly dependent upon the unpredictable confluence of the moment and Trump’s unique personality.

And that’s one reason why predictions about highly interesting historical events will remain more of a creative art than a science.