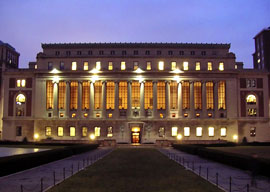 Let us return to the work of feminist pornographers:

It begins with a group of girls sitting around a library table taking their shirts off. As the film progresses, the girls engage in activities including kissing, rubbing eggs on their bodies and twerking around a chicken carcass.

I consulted the Wikipedia to see what “twerking” might be:

Twerking is a type of dancing in which an individual dances to popular music in a sexually provocative manner involving thrusting hip movements and a low squatting stance.

Ah, I thought, enlightened. It sounds like SueBob’s Red Rooster Lounge and Poon Pit in Wheeling. It takes place in the library at Columbia, thank God. If these painfully asexual co-eds took their show on the road to SueBob’s, the customers would give up sex and become stylite monks in the Syrian Desert. It is interesting, though, that that their approach to attacking men involves taking their shirts off. Merchandising seems a female instinct. I remember when feminists burned their bras, thinking that this was a blow at males. Being a boy myself at the time, I encouraged them in this political action.

But I promised psychoanalysis. My diagnosis is that Sara-kind suffer from a Fredipus Complex, which consists in a failure to separate emotionally from their parents, with whom they confuse the university. Thus the desperate desire to outrage. They could get the same effect by dyeing their hair green or going to a secluded glen and rolling in anchovy oil, thus allowing others to study. That isn”t the spirit of the thing somehow.

What I particularly like, being a connoisseur of all forms of cultural collapse, is that the grown-ups at Columbia, if any, let this stuff go on. A reasonable course would be to tell these excessively serious gal-chillun that a university is not the place for acting like stupid, self-indulgent little twits, and suspend them for a semester. Apparently this doesn”t happen, in part because the faculty are little better than the children. At the high end of the age distribution are professors who came out of the Sixties and their aftermath. These (I know: I was there) had little interest is scholarship, which they regarded as irrelevant, racist, sexist, ageist, elitist, capitalist, and male”which latter, thank God, it is. Add to this the spinelessness of academics, and the conversion of universities into profit-making corporations, and…voilÃ¡! Hail Columbia.

Per force, I yield to reality. Twerk until you drop. However, I demand democracy. It is elitist that only Columbia girls can embarrass themselves in the library, dancing around a dead chicken like ditz-rabbit Twerpsichores. I too want to squat and make thrusting movements with my pelvis at Columbia. (I worry about the chicken, though. Isn”t there an animal-rights issue here?) Yes, I know. These pole-dancers without a pole are merely expressing their deepest political conceptions. (I am prepared to believe this.) No doubt it is their right. All I ask is that I have an equal right to make an ass of myself.