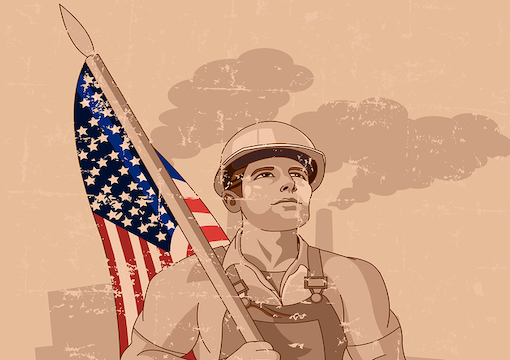 In the middle of August 1982, I was unemployed and looking for a job in New York City. A friend from MBA school called to say he could get me an interview at his Wall Street firm, J.P. Morgan.

But Wall Street work was not a gold mine in 1982 because the stock market had been in the doldrums since the 1960s due to inflation. On Aug. 12, 1982, the Dow Jones Industrial Average closed at 777. A headline in The New York Times three days later read “Dark Days on Wall Street.”

So, I turned down a chance to work on Wall Street.

Then, a couple of days afterward on Aug. 17, 1982, history pivoted. Fed chairman Paul Volcker decided inflation was whipped and interest rates would be lowered, setting off a bull market that has more or less endured for going on 38 years now. On Monday, the Dow closed at 28,400, more than 36 times higher than its August 1982 low.

Michael Lind, an old-fashioned New Deal nationalist progressive, argues in his new book, The New Class War: Saving Democracy From the Managerial Elite, that the compromises made in the 1920s–1950s that cooled off the previous class war, such as entitlements, immigration restriction, and high taxes, are overdue once again.

Of course, the class struggle of the past several decades has been a rout so far. As investor Warren Buffet explained to economist and comic Ben Stein in 2006, “There’s class warfare, all right, but it’s my class, the rich class, that’s making war, and we’re winning.”

Lind contends that what the U.S. needs now is not more globalism or more populism, but what in 1952 economist John Kenneth Galbraith labeled the countervailing power of democratic pluralism. Or to reduce Lind’s high-minded jargon to the basics: restored union clout.

Otherwise, corporations will engage in “global labor arbitrage,” a game that American workers can’t win if they are only allowed to bargain as individuals. “Only power can check power,” Lind concludes, suggesting that the bottom two-thirds or so of society mostly only have power in numbers.

Of course, organizing along lines of class was easier before diversity became so divisive. Franklin Delano Roosevelt used to be admired for Social Security and winning The Big One, but recently he’s mostly notorious for redlining.

Lind, a Texan centrist from Austin, has been arguing for much the same Sam Rayburn-style policies for the past quarter of a century. But electoral developments in Europe and the U.S. since Merkel’s Mistake of 2015 have given Lind justifiable reason for saying I-told-you-so. For example, in trendsetting Denmark, the Social Democrats have climbed back into power by conceding that the “far right” Danish People’s Party had been more or less correct on immigration policy.

“If anybody is truly serious about reviving union power, they’ll need to propose solutions for the various problems that made unions less popular in this country.”

Lind’s career has bounced back and forth between liberal journals, such as, in the 1990s, The New Republic, The New Yorker, and Harper’s, and conservative outlets such as The National Interest initially and the Trumpist American Affairs lately, where several articles that are the basis for this book first appeared.

This is not to say that Lind is pro-Trump. He concludes his chapter on “The Populist Counterrevolution From Below” by pointing out that Latin America has long cycled unproductively between elitist oligarchy and populist demagoguery:

Is this the future of the West—never-ending clashes between North Atlantic versions of Juan Peron and the equivalent of the Buenos Aires Jockey Club?

Lind sums up his thesis:

Over the last half century, the weakening or destruction by neo-liberal policy makers of the intermediary institutions of mid-twentieth century democratic pluralism, particularly labor unions, has deprived much of the working class of effective voice or agency in government, the economy, and culture. Populist demagogues can channel the legitimate grievances of many working-class voters, but they cannot create a stable, institutionalized alternative to overclass-dominated neoliberalism.

Lind contends that ad hoc antiestablishment movements can’t successfully compete with the institutional power of the elite establishment, which can, for instance, provide think-tank sinecures for White House staffers to wait out rotations of which party is in power. Instead, Lind claims, the lower ranks of the American class system need the expertise of a counter-establishment with the steady resources only available from union dues.

I find Lind’s general case persuasive. On the other hand, if anybody is truly serious about reviving union power, they’ll need to propose solutions for the various problems that made unions less popular in this country. The history of American unions is no longer of widespread interest, so I remain puzzled by various conundrums about its rise and fall.

For example, why did American unions tend to be more mobbed up than European unions?

Why did the Reagan administration taking a stand against the air traffic controllers’ strike in 1981 turn into a massive defeat for unions in general? Labor lawyer Thomas Geoghegan argues that the Republicans’ 1947 Taft-Hartley Act doomed unions in the long run by outlawing the bare-knuckle tactics of the 1930s, but it’s odd that it took so many decades to kick in.

Can unions be revitalized without the violence that accompanied their initial growth?

What obscure differences between how American and British unions versus how Northern European unions are organized made the latter less of a drag on quality and productivity? Paul Johnson argued that the British occupation authorities in West Germany in the late 1940s instituted a more efficient form of trade unionism than Britain herself enjoyed, with disastrous consequences for the U.K.’s later competitiveness in international trade.

In crafting the laws to govern unions, details matter. But it’s hard to get disinterested good advice.

Yet, how have American union-made pickup trucks, which have been protected by a 25 percent tariff since 1964, remained wildly popular with consumers? Pickup trucks do tend to be higher-priced compared with the extremely competitive family-sedan segment, which due to its mere 2.5 percent tariff is dominated by Asian brands.

And how can Democratic presidents not get blamed for strikes by their supporters that pester the public?

Lind points to World War II as the years when union membership grew the most. America was stressed enough by the war effort that it needed all classes on board, but not so stressed that it couldn’t put up with a certain amount of obnoxious behavior by unions. Even during the war, FDR began to experience what became a continuing annoyance for his postwar Democratic successors: being expected by the public to do something about the annoyances caused by strikes.

While the French seem to feel that street-fighting mobs are a proud part of the French way of life, Americans tend to find labor strife disturbing.

For example, a few years ago while reading in the newspaper about a strike by the superlative Chicago Symphony Orchestra, I began to worry that if I had to suddenly fly cross-country to Chicago and then found myself with a free evening, I wouldn’t be able to attend a performance by the CSO because of the strike.

Eventually, it occurred to me that I’d lived in Chicago for eighteen years but had only gone to hear the CSO once. (In fact, in 1991 I’d even marched in a picket line for CSO strikers to help out my late father-in-law, the head of the Chicago musicians local.) So, the odds that I would be inconvenienced by this distant and genteel labor stoppage were nil. But still…what if, due to a strike, I couldn’t get what I wanted at the moment I wanted it? Isn’t that a violation of my sacred right as a 21st-century American to consume whatever I want right now?

These days, unions are strongest among government workers and the most talented, such as baseball players and CSO musicians. To build strong mass unions back in the 1940s required polarizing strikes, ones that contemporary Americans might not put up with.

For example, James Caesar Petrillo, head of the American Federation of Musicians, shut down all music recording in 1942–44. FDR would telephone Petrillo and beg him to call off the strike for the duration of the war because GI Joe’s morale was being undermined by not hearing any new Andrews Sisters 78s. But the union boss would tell the commander-in-chief no dice.

So it’s not surprising that Democratic presidents like Bill Clinton and Labour prime ministers like Tony Blair eventually tired of union antics.

Lind’s The New Class War is written at a fairly abstract level of ideology and thus doesn’t much grapple with these more pragmatic questions about how a new pro-union policy could avoid the miscues of the past. Perhaps the hardworking Lind could answer these questions in a future book.