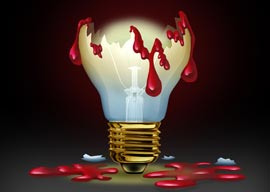 The Internet is great for finding free couches, but the news cycle to which it is prey”horrible act; outrage; more horrible action”does nothing for my existential nausea. Massacres erupt, emotional reactions follow, and decent people pound the table demanding a scapegoat to scape. But they always find the same bunch behind the mischief: a curious biped which, unless civilized just so, uses most of that brain of which it’s so proud to rationalize its basest impulses. And the more high-tech attention all these horrors receive, the more the violence seems to turn to tribal warfare.

But what if you could redesign a man without all that irrationality”a person devoid of emotions, from hatred to in-group sentimentality? What would you hope for? You would probably intend for him to lead us into paradise. But you may have just created a soulless hit man who can”t even make a friend.

Frank Fleming’s debut novel, Superego, is a portrait of a sociopath that goes deeper than TV psychos like Sherlock and Dexter to ponder the peculiar hell of life in a godless universe.

“But what if you could redesign a man without all that irrationality”a person devoid of emotions, from hatred to in-group sentimentality?”

The plot is science fiction, but the spirit is Dashiell Hammett’s, if Sam Spade had been genetically engineered. Rico, the protagonist, is a gunner for an intergalactic crime syndicate. Thanks to his father’s misguided tinkering with his DNA, he’s as good at his job as he is bad at figuring how to pass as an ordinary homo sapien with a moral instinct. He’s super-intelligent, purely logical, and wired with physical and neurological bonuses that let him do cool tricks like shooting at a different moving target with each hand. But his missing social sense is a cumbersome handicap whenever he’s not focused on a job. He agonizes over simple actions like ordering food without scaring the waitress, and his awkwardness furnishes much of the book’s ample and agile comedy:

Punching a person in the face would be an efficient way to signal the end of a conversation, but it’s almost never socially acceptable.

But like anyone who’s more logical than emotional, Rico nurtures his inner, self-justifying philosopher, and his loner lifestyle gives him plenty of time to think:

Civilized people like to think they don”t have to kill, but I don”t know of any sentient species that didn”t evolve from predators. … In a way, all of man’s highest creations”from art to literature to science”only came about because of his basic need to kill. But philosophy was just as useless in this situation as it is in any other.

Rico is selectively moral”he prefers not to kill honest people, and he banters almost affectionately with the AI personality that runs his spacecraft. Though human colonization of the galaxy hasn”t stopped Christians from being sappy and Muslims from being bomb-y, Rico’s own disbelief in the gods is tempered by a logical appreciation of why normal humans find them appealing:

Now, a lot of people consider thinking a giant killer robot is a god to be laughably ridiculous, and I get that. I just don”t get how it may be socially acceptable for me to laugh at the Calabrai and their poorly examined beliefs, but wrong for me to laugh at how people mindlessly go to their jobs every day and provide for their families with no real introspection as to why.

You can”t carve an entire science fiction plot out of gems of hard-boiled wit. So there is character development, and yes, it does involve a human female with a dark history, a church group, and a heart of gold. But though Fleming handles Rico’s dawning conscience smoothly, he doesn”t handle it tritely. Even the best fiction can have a whiff of the writing workshop to it, but Fleming writes like he was genetically modified to know the rules better than the rules know themselves.