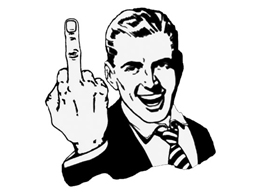 A recent report into British policing revealed the “subsidized indolence” built into the system. The problem is endemic to the entire public sector. They know their rights and their perks and their impregnable position, and because they are not paid according to results, there is no incentive to perform.

As the saying goes: If you cannot do, you teach. In fact, if you cannot teach, you teach. The records show that over the past decades only a handful of state-sector teachers have ever been sacked for incompetence. Most have to get a schoolgirl pregnant before even an eyebrow is raised. It is symptomatic of a general malaise and indifference and is a direct consequence of unionization.

Wherever there is inertia and apathy and appalling waste, you will find the trade unions. Observe the private-sector companies hived off from the state”British Airways and the railways included”and they are the ones held hostage by their militant labor force, whose service and fortune and future are compromised. A week before the London Olympics, you can bet the Tube drivers will stage a walkout, even though their subway trains stop and start automatically. Every decade produces its fresh spawning of Marxist shop stewards and trade-union bosses, men who think nothing of bludgeoning the rest of us with their atavistic demands and senseless strikes. What they proclaim is democracy and workers” rights; what they serve is their own ego and narrow self-interest.

Were I to go on strike, to mount a sit-in, or to whine about what society owes me, I would starve. That is our lot in the private sector. Yet we accept this and are the ones who take the risk and create the wealth, who use our initiative and our brains to succeed in the jungle. Those sitting cushy in their state-sponsored sinecures have no excuse. They were not forced to become care workers, were not frog-marched into council-office backrooms. In the same way I decided to become a writer, they chose their particular course. So do not march or complain or voice astonishment at no longer being able to enjoy early retirement and to take us for fools. What an impertinence that the public sector might actually have to work as hard as the rest of us; what a liberty we should demand they forfeit their final salary pension schemes as we have long since done.

Maybe the days of big government, Big Brother, and big spending are over. The postwar socialist experiment has failed. We wanted to create equality and instead produced dependency. We intended for a fairer system and instead fostered a lumbering, bloated bureaucracy that helped itself and no one else.

From the BBC to the NHS and from Education to Welfare”empires dominated by the left”the employees are paid for by an overstretched and overtaxed public. It is time to demolish the complacency and ineptitude. State-based employment is surely the enemy of enterprise. Yet I fear the cuts will be too little and far too late and we will continue our debt-laden slide. The unions and the labor movements would love that. We must deprive them of that pleasure.