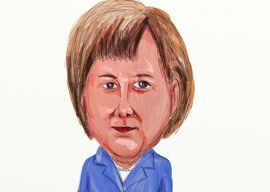 Progressivism is a facade for rule by the strongest. Nationalism is still the way the world works. What ultimately matters in terms of political power is employing armed men to collect tax revenue. In Europe, the leading state at that is Germany, so Europe today is more or less run by the chancellor of Germany. Marine Le Pen of France wrote on Tuesday:

President FranÃ§ois Hollande of France, Prime Minister Matteo Renzi of Italy and acting Prime Minister Mariano Rajoy of Spain take their lead directly from Chancellor Angela Merkel of Germany, without running through Brussels. A quip attributed to Henry Kissinger, “Who do I call if I want to call Europe?” now has a clear answer: Call Berlin.

Vast unaccountable powers have thus been seized by the German leader.

Before 2015, the E.U. could plausibly assert to be a joint effort by Europeans to garner the benefits of cooperating with their fellow Europeans. But that was increasingly sounding continentalist, and thus racist.

Therefore, the German chancellor’s decision in late August 2015 to unilaterally change the demographics of Europe in the name of newly discovered “European values” by admitting random Afghans, Eritreans, and Syrians in tracksuits doubled down ideologically on leapfrogging loyalties.

Yet Merkel also revealed to the cynical that the E.U. had become to Germany what China and Indonesia were to Imperial Japan: The Greater North Europe Co-Prosperity Sphere.

In 1999, I attended a Hudson Institute seminar addressed by former prime minister Margaret Thatcher. I sat at a dinner table with retired general William Odom, former head of the National Security Administration under President Reagan. Having spent much of his career in the U.S. Army in West Germany, he was a warm admirer of the Germans. He asked Mrs. Thatcher an impudent question about why she had been so unenthusiastic about German reunification in 1989.

After the speech, the baroness came over to continue the argument over Germany with the general. They went at it for about ten minutes like a baseball manager and an umpire arguing over a called third strike. Sitting three feet away, I was more agog over the intensity of the argument than I was following it closely.

That’s too bad, because history has moved on, and Great Power politics have returned to their traditional ruts, making the Thatcher-Odom argument over the threat of German hegemony relevant again. As in the days of Lord Byron, the English sympathize with the Greeks, the Russians sympathize with the Syrian Christians, and the Germans, much like in 1914, make deals with the Turks. But now the German leader is presumed to act for all of Europe.

According to a E.U. poll, the percentage of E.U. voters citing immigration as one of the top two most pressing issues jumped from 10 percent in 2013 to almost 60 percent in 2015.

Why? Because the European Union proved worse than useless at defending Europe from the hegira of Merkel’s Muslims. The basic question of all politics is: Whose side are you on? In 2015, the European Union gave every indication of not being on the side of Europeans. Is it any surprise that British voters chose to exit in 2016?

Granted, Dr. Merkel claimed that she had to destroy Europe to save it. But, to a Brit, what was the point of 1939″1945 if a German chancellor still wound up ruling over Europe?