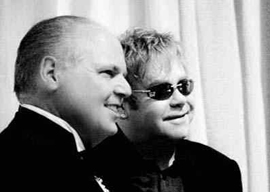 I heard that when a plant is about to die, it may use its last burst of energy to produce more seeds. The same has been said about animals in danger. They tend to produce more female offspring as a desperate attempt to continue the species. This is what we have been forced to do with marriage. That means yes polygamists, we need you too. You shouldn”t be allowed to marry anyone under 18 but there is nothing in the argument for gay marriage that cannot be equally applied to polygamists. For all the politicians and pundits telling us how sacred marriage is, it’s not easy finding one who hasn”t flushed it down the toilet at least once. Pat Robertson and Pat Buchanan are the only two I can think of right now.

American Indians are very touchy about their culture and are turned off by white sycophants who want to get involved. My wife’s tribe is down to about 3,000 people, but my argument is that beggars can”t be choosers. Let whites come to powwows and take all the pictures they want. Let them learn the language. If a culture is in danger of becoming extinct, lower the bar on membership. We live in a culture where divorce is all but applauded, so we should make it easier to get married. Boomer selfishness damaged marriage beyond repair and if someone wants to come in and breathe some life into it, then by all means, breathe.

Here in New York, comedian Louis CK is a God. He divorced his wife when his youngest kid was three years old, but he still jokes onstage about how awesome divorce is and what a great dad he is now that he has half the week to himself. That’s not a great dad. That’s a half a dad. Why did he have a kid if he only had three years of marriage left in him? When you get divorced, you”re telling your kids that the love that created them was a myth. The media empowers single moms, and while children of divorce will tell you it’s no big deal, that’s not what I see. As I scroll through the contacts on my phone, I see almost nothing but children of divorce who will die childless. I can only find about five friends from college and high school who have families. The rest don”t want anything to do with it. In that sense, the baby boomers” flippant attitude toward marriage has led to a kind of invisible genocide.

People don”t want to criticize divorce in America because they”ve either done it, are about to do it, or love a parent who did it. Today a man can marry a woman, knock her up, and leave a couple years later citing excuses like, “I wasn”t happy” or “We fell out of love.” Ann Coulter describes this as a form of child abuse. Who has time for emotions when they”re raising children? I have three kids right now and barely have time to brush my teeth. Having kids is like moving to China. You can”t go, “Ew, it’s way too Chinese here” and move back when winter hits. You have to dig in your heels, learn the language, and make it work.