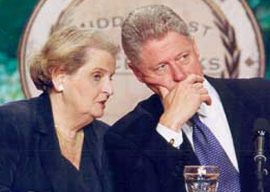 A historian (and ex-Marine) friend reacted to Scott Locklin’s essay about the importance of tough manliness: “One of the reasons I hate liberalism is that it is wimp liberalism.” He then adduced the therapeutic state’s handling of violent criminals as an example of limp liberalism. He said that had the hyper-macho POTUS Theodore Roosevelt been reelected in 1912, the Germans wouldn’t have dared to start World War I.

Scanning the news page the other day, it struck me that liberalism—even when not limp but incarnated in such priapic women as La Hillary, Samantha Power, Susan Rice, the Napolitano person, or Janet Reno—is still a road to war, mayhem, and self-destruction. Instigating idiotic wars in faraway places with billions spent—not a dime of which we have—and then “hoping” via a menopausal psychotic she-narcissist that the rebels “safeguard” 20,000 surface-to-air missiles, the black-market value of which rests in their ability to shoot Boeings out of the sky—why, that strikes me as utopian estrogen-cockiness deserving the most hateful opprobrium. Same goes for pleading that Egyptian mobs whose ascension the US has foolishly sponsored refrain from their destruction of the Israeli Embassy and the Middle East’s fragile peace with it.

It’s no coincidence that back in March, shortly after this whitey-sponsored Arab Spring insanity was initiated, the addled gelding Sen. Lindsey Graham (R-SC) was spouting on teeveee to Chris Wallace:

“Europe has been destroyed partly because gelded men have streamed insane socialist women into positions of power….”

Thank God for strong women in the Obama Administration….I think the president has caveated this way too much. It’s almost like it’s a nuisance.

Europe has been destroyed partly because gelded men have streamed insane socialist women into positions of power in defense, internal security, law enforcement, foreign policy, etc., there to implement their lunatic passive-aggressive chimeras. This is how a deconstructed postmodern Minister of Defense (in this case, of Spain) does troop review, her maternity dress billowing, fittingly four years after her country capitulated before reconquista Muslim terrorists. And this woman—a socialist baroness, no less—had as much to do with immersing bankrupt Europe in the expensive and dangerous hellhole of the Arab Spring as BHO’s “three strong women” had to do with nudging the near-bankrupt America to jump into that terrible morass.

The liberal-progressive David Brown’s choice for Home Secretary, Jacqui Smith, among her many stupefying displays of terminal stupidity renamed terrorism by fanatical Muslims “anti-Islamic activity” and described fanatical Muslim terrorists as “criminals whose victims come from all walks of life, communities and religions.” For a change, “conservative” David Cameron’s choice for Home Secretary, Theresa May, has been not only densely dim in responding to widespread rioting in Great Britain, but repeatedly so.

If Obama has his three strong women, the fatuous “conservative” poseur Bush used to send Condoleezza Rice and Karen Hughes to represent the United States before medieval Arabian potentates to better elicit their pity for the idiot giant. Clinton had his big ones (Reno) and small ones (Shalala), but his iconic yenta—other than the Mrs.—must have been Madeleine Albright. Immortalized in her hen-on-amphetamines approach to the job of Secretary of State in this David Zucker video, Madam Secretary is now, among her many other ventures for spreading strong estrogen doctrine, the doyenne of the Council on Foreign Relations.